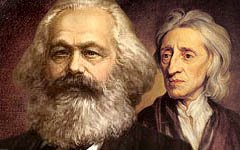 Leonidas believes the below excerpted TCS Daily essay by Arnold Kling is a valid account of the so called "liberal" versus "conservative " (left vs right if you will) debate that seems to rage around so many social and political issues these days.

"the moral authority of parents who bury children killed in Iraq is absolute"
-- Maureen Dowd, the New York Times

"Maureen Dowd's statement is Marxist. No, she did not advocate revolution by the proletariat. She did not say that we ought to have a Communist state. But her famous remark that someone in a particular class of victims has "absolute" moral authority is derived from "folk Marxism," as will be explained below.

...[T]he views of important thinkers become distilled into folk beliefs and these folk beliefs shape our societies. John Locke and Karl Marx are two thinkers whose enormous influence can be described using this model.

-- individuals have inalienable rights
-- those who govern have obligations to the governed (and not just vice-versa)
-- government's rightful powers are limited, not absolute

As Americans, we cannot conceive of ourselves submitting meekly to tyranny. We cannot picture a regime like that of North Korea or Saddam Hussein's Iraq taking root in our soil.

By maintaining our Lockean tradition, we have built a vibrant society and a prosperous economy. Limited government has allowed innovation to flourish in a peaceful, gradual, evolutionary way.

Folk Marxism helps to explain the pride and joy that many people felt when Maryland passed its anti-Walmart law. They think of Walmart as an oppressor, and they think of other businesses and Walmart workers as the oppressed. The mainstream media share this folk Marxism, as they reported the Maryland law as a "victory for labor."

The folk Marxist view of Iraq is that the United States is the oppressor, and the groups fighting the United States are the oppressed. At the extreme, Michael Moore and Ted Rall have made explicit statements to this effect. However, even reporters in the mainstream media who are not openly supporting the enemy take this folk Marxist view when they refer to "the insurgency."

If you think about it, the forces fighting America in Iraq consist of former oppressors and would-be future oppressors. But because America is a rich, powerful country, the folk Marxist instinct is to romanticize ("insurgency") the real oppressors and to demonize ("occupation") the real liberators.

I am not saying that only a folk Marxist would oppose the way we went to war in Iraq or the way that the war has been conducted. However, I would say that it is striking that the basic narrative of the war coming through the mainstream media is folk Marxist. This is particularly true in Europe, where the folk Marxist view of America's presence in Iraq appears to be broadly and deeply held.

The rationale for tax cuts -- "It's your money" -- makes sense to folk-Locke-ism. It drives folk Marxists crazy.

Folk Marxism can explain why some environmentalists do not like using taxes to control pollution. If you think of polluters as the oppressors and everyone else as the oppressed, then merely taxing pollution is not morally satisfying.

The Consequences of Locke and Marx

The differing consequences of Locke and Marx are not an accident. Under folk Locke-ism, each individual has moral standing. We all are endowed with rights, and we all are obligated to follow the law. It should be no surprise that the principle of equality before the law would lead individuals to focus on mutually advantageous interactions. It should be no surprise that inequality before the law, such as the Jim Crow South of 50 years ago, would come to be regarded as a blot and a national disgrace.

Under folk Marxism, the oppressed class has inherent moral superiority to the oppressor class. Class membership trumps individual character in determining moral standing. It inverts Martin Luther King's call to judge people by the content of their character.

Even when Marxism does not lead to tyranny, it retards economic growth, as the stagnation of continental Europe indicates. If you believe that the poor are oppressed and the rich are oppressors, then your impulse is to penalize work, risk-taking, innovation, and saving -- the engines of economic progress. As entrepreneur Paul Graham put it,

"So let's be clear what reducing economic inequality means. It is identical with taking money from the rich...It sounds benevolent to say we ought to reduce economic inequality. When you phrase it that way, who can argue with you? Inequality has to be bad, right? It sounds a good deal less benevolent to say we ought to reduce the rate at which new companies are founded. And yet the one implies the other."

Marx and the Academy

The vast majority of college professors are folk Marxists, even though they do not advocate for Communism. Their folk Marxism is dangerous because they do not even realize the extent to which it colors their world view. Although the academy is also the last bastion of avowed Marxists, it is not the overt Marxists who trouble me. They are not winning converts.

Every day, in big and small ways, academic speech reinforces the view that the world consists of oppressor classes and oppressed classes. Folk Marxism is so automatic and so pervasive that it effectively goes unnoticed.

I would consider it a great step forward for liberals in the academic community to acknowledge the existence of folk Locke-ism and folk Marxism.

The danger of folk Marxism in the academy today is that it is implicit and unrecognized -- and therefore unquestioned."

(Editor’s Note: This article is part of a series on the effects of ideas on the popular mindset.)

“Whenever the legislators endeavor to take away and destroy the property of the people, or to reduce them to slavery under arbitrary power, they put themselves into a state of war with the people, who are thereupon absolved from any further obedience.” ~ John Locke

Wadical said...
This comment has been removed by a blog administrator.
8:38 AM

Very interesting read. Public education is being taught by the very products of these Marxist college professors. Jay Bennish's 20+ min diatribe to his 10th grade World Geography class was anything but education. It was indoctrination. His teaching style: read this chapter at home, be prepared to know this material...oh look I've got 50 minutes left to talk about world affairs as I see it. Write these definitions down....while you do, I shall indoctrinate you. He's back at work now, having never lost a days pay. And now he's famous. I want to vomit.

You say that team Marx tends to romanticize but you, under team Locke, fall in that exact trap via this blog post. Karl Marx vs. John Locke became Evil vs. Good which isn't really a discussion at all.

Thanks for stopping by anonymous 11:59. The post is a quote of the original by Arnold Kling and You are right. The philosophy that resulted in the murder of over one hundred million humans during the last century could conceivably be characterized as "evil".

(1)You make a very interesting point in your article. Your analysis of Marx and Locke is very comprehensive, however I would like some clarification. Locke says in Chapter 5 of the Second Treaties of Government, premise 31, "It will perhaps be objected to this, that if gathering acorns, or other fruits of the earth, makes a right to them, then any one may engross as much as he will. To which I answer, Not so. The same law of nature, that does by this means five us property does also bound that property too."God has given us all things richly," 1 Tim;IV.17, is the voice of reason confirms by inspiration. But how far has he given it us? To enjoy. As much as any on can make use of to any advantage of life before it spoils, so much he may by his labour fix a property in: whatever is beyond this, is more than his share, and belongs to others. " Locke shares ideas with Marx in many areas, even on property. But more importantly.

(2)Locke makes many references to the differences between man( Second Treaties chapter 4 - On slavery). Which you could interpret as part of this 'Folk Marxist' thinking.

(3)Your comment in reference to Anonymous 11:59, "The philosophy that resulted in the murder of over one hundred million humans during the last century could conceivably be characterized as 'evil'." is a informal fallacy - Appeal to emotion.

Daniel,
This posting is now nearly 4 years old and yet continues to generate traffic. I suspect that it has found its way into the syllabus of an as yet obscure academic. Please remember that it is merely an abstracted version of the original and linked essay by Arnold Kling.

1) Locke's "acorn" analogy must be understood in light of nature (God?) having endowed mankind with rational thought. The labor and capital associated with the gathering of acorns beyond one's immediate needs while endowing property rights will eventually encounter diminishing returns. This may be a point of agreement between Locke and Marx.

2) Another good source for examining "folk Marxist" thinking is Herbert Marcuse and others of the Hamburg School. See also "political correctness".

3) Obviously, one man's "evil" is another man's "expediency". Not a fallacy but a moral evaluation.