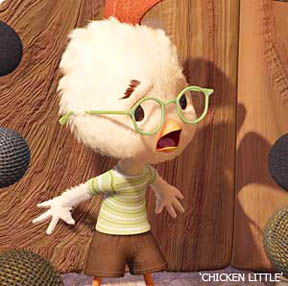 In the last 500 million years, there have been two ice ages at the same time that vastly higher carbon dioxide levels prevailed in the earth's atomosphere—up to 16 times the present level.

This remarkable finding, along with others, was reported in the November 7, 2006 New York Times. For details, see the article by William Broad, “In Ancient Fossils, Seeds of a New Debate on Warming."

The article contains references to the work of a number of important scientists who aren’t supposed even to exist, according to the environmentalist [and warmista] propaganda machines, which brook no opposition. The article deserves to be required reading for everyone who is seriously interested in the subject of global warming.

The global warmistas advise: "In order to avert this catastrophe you must sacrifice your favorite goat".

"Climatologists and policy makers, they say, need to ponder such complexities rather than trying to ignore or dismiss the unexpected findings."

I found this the most useful statement in the article.

In past posts, you have lambasted the use of scientific models. In this post, you seem to accept the validity of the models.

Is it possible that you are starting with a belief, then only accepting accounts that support your belief?

Me, I've let go of believing in the threat of human caused global warming. Climate is far too complex for me to understand, and I suspect it's far to complex for even those who've devoted their lives to studying it to understand.

Lorenz said something like: a butterfly flapping it's wings in China can cause a hurricane in Florida.

What do you think about this article?

Interesting stuff. The study of everything imaginable continues. Things learned today are alleged to disprove things we took as "fact" yesterday. The point I am trying to make is that for me to agree to sacrifice my favorite goat, the witch doctors need to present verifiable and conclusive proof that the gods will indeed be pleased and relent, rather than churn out "studies" that the politicians wish to use to increase their power.
An excellent Q&A discussion on this can be found at: http://www.american.com/archive/2006/november/q-a

I don't put much stock in that Q&A. My impression was the author started with a belief, then presented answers to self selected questions that supported that belief.

Perhaps. But wouldn't I have to examine and understand a significant number of the numerous studies and models related to climate change to form any meaningful opinion? Are the references of this particular individual comprehensive, selected to create a desired view, or some other possibility?

Any scholarly work subjected to "peer critique" is subject to attack. That is the point of this exchange. My in-laws from Sweden unaware of any data which questions the official UN EU position. They therefore consider most of us Americans as barbaric. Never mind the fact that if it were not for us "barbarians" the official language in Stockholm would be Russian. As the "Faux" News folks say: "we report you decide".