What Did He Say? 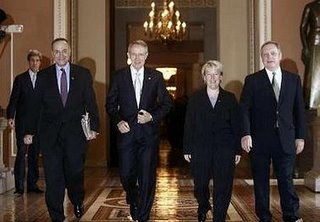 "An ABC News reporter said the incident occurred Tuesday outside of the Old Senate Chamber as members of the new Democratic leadership, of which Kerry is not a part, left the chamber en route to the Ohio Clock Corridor to discuss leadership elections, the incoming majority's agenda and Iraq.

The ABC reporter said Kerry left the room behind Democratic Leader Harry Reid, D-Nev.; Whip Dick Durbin, D-Ill.; Caucus Secretary Patty Murray, D-Wash.; and Caucus Vice-Chair Schumer, D-N.Y. However, when Schumer noticed Kerry, D-N.Y., walking behind him, he turned and said something to the Massachusetts
senator that caused him to stop.

Kerry waited for the Democratic leaders to walk ahead and then ducked between two statues. The ABC reporter speculated that Schumer may have told Kerry to stay clear of the leadership shot.

ΛΕΟΝΙΔΑΣ would speculate Shumer said something along the lines of: "Go fetch 4 martinis."