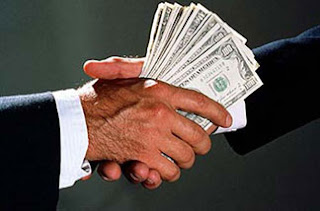 We are frequently chided by our leftist and global warmista friends with the allegation that "Big Oil" corporations are "funding " the studies by heretical scientists who question the efficacy anthropogenic climate change. Recently two US Senators wrote a threatening letter to the CEO of ExxonMobil for issuing grants to organizations engaged in studies casting doubt on the man made causes of climate change.
In accusing ExxonMobil of giving "more than $19 million since the late 1990s" to public policy institutes that promote climate holocaust "denial," Senate Inquisitors Olympia Snowe and Jay Rockefeller slandered both the donor and recipients. Moreover, this is less than half of what Pew Charitable Trusts and allied foundations contributed to the Pew Center on Climate Change alone over the same period.

It's a pittance compared to what U.S. environmental groups spent propagating climate chaos scares. It amounts to 30 cents for every $1,000 the United States, European Union and United Nations spent since 1993 (some $80 billion in all) on global warming catastrophe research. And it ignores the fact Exxon's grants also supported malaria control, Third World economic development and other efforts.

Scientists who use climate change to explain environmental changes improve their chances of getting research grants from foundations, corporations -- and U.S. government programs that budget a whopping $6.5 billion for global warming in 2007. They also increase the likelihood of getting headlines and quotes in news stories: "Climate change threatens extinction of rare frogs, scientist says." Climate disaster skeptics face an uphill battle on grants, headlines, quotes and job security.

Environmental activists use climate fears to raise billions of dollars via direct mail and foundation and corporate grants -- to promote government control over resource use, technological change and economic development. Recent developments promise greater rewards.
Environmental Defense is collaborating with brokerage giant Morgan Stanley, to promote emission trading systems and other climate change initiatives -- giving ED direct monetary and policy stakes in the banking, investment and political arenas, and in any carbon allowance or cap-and-trade programs Congress might enact.

ED designed and led the disingenuous campaign that caused many health-care agencies to ban DDT, resulting in millions of deaths from malaria. Along with Greenpeace, Sierra Club, Union of Concerned Scientists and other groups, it still posts deceitful claims about DDT online, perpetuating the disease. By blaming climate change for malaria, they deflect criticism for their vile actions.

Climate cataclysm claims also enable activists to gain official advisory status with companies and governments -- and make it "ethical" for them to oppose power generation in Third World countries, where few have access to electricity.

Ponder the British environment minister's latest prescription: World War II rationing, no meat or cheese, restrictions on air travel, no veggies not grown locally. Imagine Africans with little solar panels on huts, while kleptocratic dictators get huge payoffs for trading away their people's right to generate electricity.
We should improve energy efficiency, reduce pollution and develop new energy technologies. But when we act in response to exaggerated or imaginary crises, we railroad through unworkable programs with horrendous unintended consequences.

Meanwhile the global warmista bandwagon rolls on with Al Gore and the world's politicians cracking the whip.