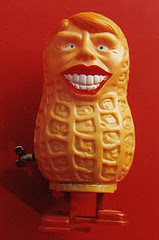 According to his recently released screed Palestine: Peace not Apartheid former president Jimmy Carter is concerned about "apartheid" as practiced by Israel. As we know, Israel does not consider ones religion or gender with respect to the suffrage, court testimony or driving autos but Carter ignores such considerations when practiced by his friends the Saudis. Can it be due to the millions of dollars donated to the Carter Center by his keffeiya wearing friends?

Peanut farmer and ex president Jimmy Carter is absolutely correct, there is apartheid in the Middle East. But for some not totally unexplainable [sic] reasons he named the wrong country rigorously involved in this vile practice. The correct discriminatory country is--no surprise!--Saudi Arabia, the same country which is funding hate filled textbooks in Moslem schools around the world, the country where yesterday tourists were murdered for the crime of traveling on a Saudi highway limited to Moslems only.

The area the group was traveling in is restricted for Muslims only. Non-Muslims are barred from the area around Medina and neighboring Mecca, the holiest cities in Islam.

And to guarantee dhimmi (second class) infidels clearly understand the message and don't defile the holy area, Jim Crow highway signs are vividly posted in several languages steering "Muslims only" to Makkah (Mecca); alongside another one which sternly commands "obligatory for non muslims" to follow the direction of several bold arrows.

How about a Saudi Arabia Apartheid Week on American and Canadian campuses this week? Or perhaps a new Jimmy Carter book entitled Saudi Arabian Apartheid is similar to Georgia's Past Apartheid?

The truth would be refreshing but is unlikely to be given a voice by Mr Carter who continues to refuse any debate on his book's many distortions and inaccuracies. Could this be part of the "national malaise" referred to by Mr Carter in 1979?
By the way, don't expect the French surrender monkeys to protest this outrage too loudly.
at 8:24 AM