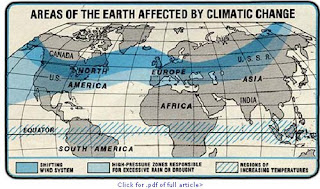 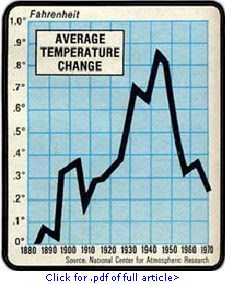 There are ominous signs that the Earth’s weather patterns have begun to change dramatically and that these changes may portend a drastic decline in food production – with serious political implications for just about every nation on Earth. The drop in food output could begin quite soon, perhaps only 10 years from now.

The regions destined to feel its impact are the great wheat-producing lands of Canada and the U.S.S.R. in the North, along with a number of marginally self-sufficient tropical areas – parts of India, Pakistan, Bangladesh, Indochina and Indonesia – where the growing season is dependent upon the rains brought by the monsoon. [Photo]
The evidence in support of these predictions has now begun to accumulate so massively that meteorologists are hard-pressed to keep up with it. In England, farmers have seen their growing season decline by about two weeks since 1950, with a resultant overall loss in grain production estimated at up to 100,000 tons annually. During the same time, the average temperature around the equator has risen by a fraction of a degree – a fraction that in some areas can mean drought and desolation. Last April, in the most devastating outbreak of tornadoes ever recorded, 148 twisters killed more than 300 people and caused half a billion dollars' worth of damage in 13 U.S. states.

[Photo] To scientists, these seemingly disparate incidents represent the advance signs of fundamental changes in the world's weather. Meteorologists disagree about the cause and extent of the trend, as well as over its specific impact on local weather conditions. But they are almost unanimous in the view that the trend will reduce agricultural productivity for the rest of the century. If the climatic change is as profound as some of the pessimists fear, the resulting famines could be catastrophic. “A major climatic change would force economic and social adjustments on a worldwide scale,” warns a recent report by the National Academy of Sciences, “because the global patterns of food production and population that have evolved are implicitly dependent on the climate of the present century.”

A survey completed last year by Dr. Murray Mitchell of the National Oceanic and Atmospheric Administration reveals a drop of half a degree in average ground temperatures in the Northern Hemisphere between 1945 and 1968. According to George Kukla of Columbia University, satellite photos indicated a sudden, large increase in Northern Hemisphere snow cover in the winter of 1971-72. And a study released last month by two NOAA scientists notes that the amount of sunshine reaching the ground in the continental U.S. diminished by 1.3% between 1964 and 1972. [Photo]
[Photo] [Photo]
To the layman, the relatively small changes in temperature and sunshine can be highly misleading. Reid Bryson of the University of Wisconsin points out that the Earth’s average temperature during the great Ice Ages was only about seven degrees lower than during its warmest eras – and that the present decline has taken the planet about a sixth of the way toward the Ice Age average.

Others regard the cooling as a reversion to the “little ice age” conditions that brought bitter winters to much of Europe and northern America between 1600 and 1900 – years when the Thames used to freeze so solidly that Londoners roasted oxen on the ice and when iceboats sailed the Hudson River almost as far south as New York City.

[Photo]Just what causes the onset of major and minor ice ages remains a mystery. “Our knowledge of the mechanisms of climatic change is at least as fragmentary as our data,” concedes the National Academy of Sciences report. “Not only are the basic scientific questions largely unanswered, but in many cases we do not yet know enough to pose the key questions.”

Meteorologists think that they can forecast the short-term results of the return to the norm of the last century. They begin by noting the slight drop in overall temperature that produces large numbers of pressure centers in the upper atmosphere. These break up the smooth flow of westerly winds over temperate areas. The stagnant air produced in this way causes an increase in extremes of local weather such as droughts, floods, extended dry spells, long freezes, delayed monsoons and even local temperature increases – all of which have a direct impact on food supplies. “The world’s food-producing system,” warns Dr. James D. McQuigg of NOAA’s Center for Climatic and Environmental Assessment, “is much more sensitive to the weather variable than it was even five years ago.” Furthermore, the growth of world population and creation of new national boundaries make it impossible for starving peoples to migrate from their devastated fields, as they did during past famines.

Climatologists are pessimistic that political leaders will take any positive action to compensate for the climatic change, or even to allay its effects. They concede that some of the more spectacular solutions proposed, such as melting the Arctic ice cap by covering it with black soot or diverting arctic rivers, might create problems far greater than those they solve. But the scientists see few signs that government leaders anywhere are even prepared to take the simple measures of stockpiling food or of introducing the variables of climatic uncertainty into economic projections of future food supplies. The longer the planners delay, the more difficult will they find it to cope with climatic change once the results become grim reality.