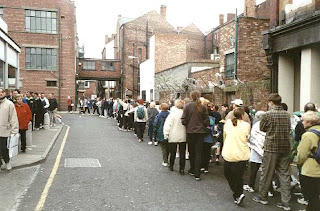 With most of the current crop of next year's presidential hopefuls in the Democratic party signing on to the socialized medicine bandwagon it is appropriate to examine the results of adopting such a program.

In January 2006, Mr. McCreith suffered his first seizure. The Newmarket Hospital diagnoses his seizure as epileptic and prescribes anti-seizure drugs. Mr. McCreith has a MRI scheduled for May 27, 2006.

During the month of January 2006, Mr. McCreith continues to suffer from headaches and seizures on an almost daily basis. Mr. McCreith decides to seek a second opinion.

On February 2, 2006, Mr. McCreith contacts Timely Medical Alternatives and the next day has an MRI in Buffalo, New York USA and is diagnosed with a brain tumour.

On February 13, 2006, Mr. McCreith returns to Buffalo for a specialist consultation.

On March 6, 2006, Mr. McCreith returns again to Buffalo for a scheduled biopsy, during which time doctors decide immediately to perform surgery and remove tumour.

On March 14, the pathology report concludes that Mr. McCreith’s tumour was malignant.

In November 2006, Mr. McCreith is cancer-free and agrees to begin process of filing lawsuit against Ontario provincial government.

Mrs. ΛΕΟΝΙΔΑΣ is a Swedish citizen and has a sister that recently was allowed to undergo a colonoscopy after a 5 month wait. For those of you who have "enjoyed" such a procedure, imagine having it done without benefit of anesthetic. That "frill" was too costly for the Swedish taxpayers to underwrite.

London's Observer (3/3/02) carried a story saying that an "unpublished report shows some patients are now having to wait more than eight months for treatment, during which time many of their cancers become incurable." Another story said, "According to a World Health Organisation report to be published later this year, around 10,000 British people die unnecessarily from cancer each year -- three times as many as are killed on our roads."

Despite the long waiting times Canadians suffer, sometimes resulting in death, under federal law, private clinics are not legally allowed to provide services covered by the Canada Health Act.

Some of our politicians hold up the Canadian and British nationalized health care systems as models for us. You can bet that should we ever have such a system, they would exempt themselves from what the rest of us would have to endure.