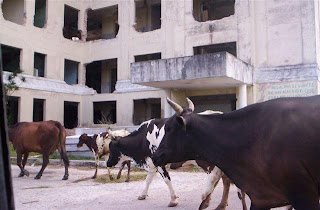 The slogan decorates many of the billboards in Havana and other Cuban cities and translates "socialism or death". The reality is more likely "socialismo es muerte" (socialism is death).

On May 20, 1989, Cuban dictator Fidel Castro inaugurated the new maternity ward at the Julio Trigo Hospital in Arroyo Naranjo, near Havana. It was a very modern facility with 425 beds. Here is what he said at the time:

"Well, I think we have a magnificent hospital facility. It was finished a few weeks ago and has already started to render services, except the inauguration was delayed a little. That's fine though because we are still on time. I was saying that it is a magnificent hospital facility. I asked the public health investor: How does it compare with other maternity hospitals? He said to me: Undoubtedly, this is the best one in Cuba. This is logical because I think that every new thing we make should be better.... As with every one of these hospitals, there will be something that will be amended, there will be things that are perfected. Even though they are similar projects, there is no doubt that each one will be better than the other. Here, however, we have the best maternity-infant hospital in the country."...If we use the advantages of socialism, everything is possible. You can see yourselves here. You are all mixed--construction workers, doctors, students. We have mixed health, construction, and politics. Fatherland or death, we shall win"

That was in 1989. The photo above is how "the best maternity-infant hospital" in Cuba looks now.
at 2:52 PM