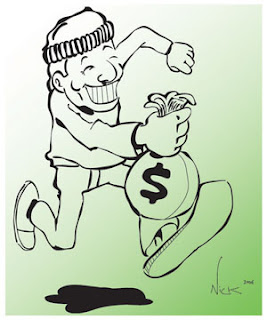 It becomes increasingly clear that the hugely hyped and costly circle jerk conference in Bali designed to prevent the politicians rice bowls from being threatened by objective reality will only result in the warmista political religionists e.g. politicians and their paid "scientific" shills circling the wagons. In spite of mounting scientific evidence to the contrary, the proponents of increased government power continue to insist that "the scientific" consensus is that "global warming" which has recently been amended to climate change due to lack of any measurable global temperature increase, is a man made catastrophe that can only be averted by massive accretions of government power.

“It is a circus here,” [stat]ed Australian scientist Dr. David Evans. Evans is making scientific presentations to delegates and journalists at the conference revealing the latest peer-reviewed studies that refute the UN’s climate claims.We now have quite a lot of evidence that carbon emissions definitely don’t cause global warming. We have the missing [human] signature [in the atmosphere], we have the IPCC models being wrong and we have the lack of a temperature going up the last 5 years,” [...] Evans authored a November 28 2007 paper ”Carbon Emissions Don’t Cause Global Warming.”
Evans touted a new peer-reviewed study by a team of scientists appearing in the December 2007 issue of the International Journal of Climatology of the Royal Meteorological Society which found “Warming is naturally caused and shows no human influence.” “Most of the people here have jobs that are very well paid and they depend on the idea that carbon emissions cause global warming. They are not going to be very receptive to the idea that the science has gone off in a different direction,” Evans explained.

Guess what. Those inflated salaries and other perks are NOT paid by "Big Oil".

Meanwhile, the juggernaut grinds on with the media and politicians moving forward with plans to seize more cash from and power over the industrialized world's producers of wealth.

Will this scam succeed? See this essay and cast your vote.

I used to think that the "minds" behind the Global Warming were simply Chicken Little crazy.

I used to think Algore was a deluded fool.

He's not deluded or a fool. He's wealthy because of the lies he propogates........

With due respect to your Agnosticism, I think it's Dante's Seventh Ring for him. Liar and manipulator.....
Best regards,
Wollf

PS...If you feel it's worthy, send my posting on Cards to the Wounded on to your fellows.

I don't "need" the links, but I do need these kids to get their hugs.