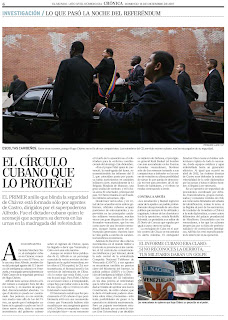 A confirmation of previous reports of the events of the Venezuelan referendum on Hugo Chávez' proposed constitutional changes was published today in the Spanish newspaper El Mundo. The article is in Spanish but a good synopsis is presented here as well as a complete translation here. It confirms that in fact Hugo intended to steal the election but was notified by Fidel Castro that the Venezuelan military was mobilizing for a coup d' état in such an eventuality.

According to El Mundo, the G-2, Castro's intelligence service who handles Hugo Chavez's personal security, informed Cuban dictator Fidel Castro that several of Venezuela's army units were getting ready to act if Chavez refused to accept the results, as he was initially trying to do.

The G-2 told Castro that there were troop movements in several key armed forces garrisons, including the 41 Armored Brigade in Maracay and the El Libertador air base.

According to high Venezuelan government officials who spoke anonymously with El Mundo, Castro called Chavez after midnight, Venezuela time, to let him know what the G-2 knew and to let him know that if he didn't accept the results, the Venezuelan armed forces were going to get rid of him.

Soon after that, Chavez went on national television and accepted his defeat.

These conditions did not obtain in the elections of 2004 and 2006 which one could infer were also stolen by Chávez under the aegis of Jimmy Carter, our dictator friendly ex president . An interesting question arises concerning the local military commanders' status now that Hugo has so "graciously" accepted defeat. One wonders.

Thanks for supporting the boycott of Venezuela!

Tis a pity that Hugo got that call.

Could have been quite interesting.
Wollf

It is great news that the people were going to stand up and say NO.