The End Times for Liberty? 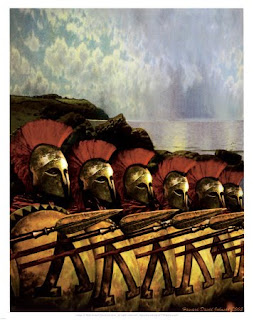 Those readers who have been following the scribblings of this fearless blogster (both of you know who you are) have noted a somewhat tapering off of his screeds recently. He is tempted to attribute the lack of cogent production to "burnout" but that would be less than candid of him. The truth of the matter is more mundane. He is much less "fearless" than heretofore.

Included among the blessings of youth is the assumption that one is invincible, immortal; bulletproof as it were. This and forced conscription I believe, are two of the contributing factors toward the ability of rulers to mobilize cannon fodder in order to achieve this or that political objective.

As youth fades and the sum of worldly experience increases, the reverse of the coin of life begins to manifest itself to wit, the observance of long term trends. The most depressing trend that Leonidas has witnessed over yea these threescore and thirteen years is the inexorable advance of collectivism to the detriment of individual liberty.

Intervening between the current progress toward collectivism and the re emergence of the value of individual liberty appears to be a descent into what many would characterize as a "dark age" similar to the conditions obtaining subsequent to the collapse of the western Roman Empire in the sixth century AD.

Indeed, as western/Roman civilization disintegrated due to corruption of the political/economic system your humble blogster sees similar forces at work today.


This past week yields on [Greece's] 10-year bonds surged in the wake of downgrades by the bond rating agencies, which finally recognized that Greece does not have the financial resources needed to repay its debts, which now stand near junk levels.  Not far behind are Latvia, Spain, Ireland, the United Kingdom and almost every other country in Europe, even though they may still flog paper rated as “investment grade.”  The reality is that the rating agencies just have not yet come to grips with the breadth and depth of widespread government insolvency, or have willingly turned a blind-eye to it.  And don’t forget Iceland which of course has already collapsed.
How did we sink to this state of affairs?  Nobel Laureate Friedrich von Hayek provides the answer in his brilliantly insightful and prescient book, The Road to Serfdom, penned during the waning years of the Second World War.
Hayek’s central theme is that wars expand the power of the modern state because the national planning to fight the war continues even during times of peace.  This perennial government planning then expands the social-welfare state over time, with harmful results.  Most importantly, economic activity is impeded by the growing state as people and resources become less productive.  In other words, because the government does not create consumable goods and services, it is an economic burden to the productive sector of the economy.


The insolvency of socialist governments invariably results in rioting and chaos in the streets as the proletariat demands the fulfilling of promises made by collectivist politicians who have assured them that there is in fact a "free lunch".

"More people depend on the state than those who provide it with the money the state needs to meet its promises.  Most of Europe long ago passed the 50% threshold with more people depending on government than the private sector, but even in the United States – long reigning as the bastion of capitalism, free-markets and limited government – 58% of the population derives their income from government at some level. "

The precise details of how the train wreck is to be played out remain to be seen. This old Spartan is not sanguine as to the medium term outcome and is carefully husbanding his last cartridge.

Ya just got to keep typing. No raindrop thinks he's responsible for the flood.

....which is why I will always be an Oath Keeper, and also why I shall never "join" Oath Keepers.

It's that old MOS of mine, yannow?

Rather reach out and touch someone without them having a clue where I am.

Keep writing if it's burn out!