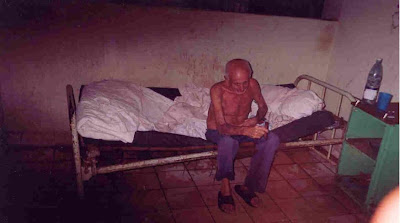 Lost in the debate on "Health Care Reform" here in the US is one of the most important reasons to reject government collectivized  delivery of medical care. Yoani Sánchez, the Cuban blogger who lives in Havana eloquently describes the circumstances obtaining in a society where health care is collectivized:


It delights us to cure ourselves of that stage of life we call adolescence and, in particular, to become independent. Finding an answer to that question we have asked ourselves so often: “What do you want to be when you grow up?” Able to leave home without explaining ourselves, being responsible for our own destiny, and, above all, not having to listen to any parental admonition: “As long as I am supporting you, you must do what I tell you.”

Nations that develop under the guidance of a paternalistic state run the risk of leaving their people in a kind of stagnated adolescence. The case of Cuba is one of the paradigmatic examples. We live under the national authority of a government characterized by the continuity of the people in power, who have tried to subsidize a portion of our basic necessities. With great pride, the official media touts that medical care and all levels of education are free, as well as the existence of rationing which supposedly guarantees a basic market basket.

It is understood that public funds defray this maintenance, funds generated by workers who produce what they themselves cannot touch and who are not compensated for doing so. Obviously work is not stimulating and what is earned barely stretches to cover what is subsidized. Papa State does not allow the expression of divergent opinions, much less that people organize themselves around these ideas or reach economic independence; what is worse is that he demands infinite gratitude. Fortunately, as the familiar paternalistic model has taught us, everything tends to change with the passage of time. The children grow, turn into adults, and nothing can stop what the youngest will do with the keys to the house.


As Yoani points out so cogently, when the government controls the system by which health care is delivered it can will control every facet of its subject's lives.  We here in the US have already experienced the camel's nose under the edge of the tent. You must wear a seatbelt while traveling in a motor vehicle and wear a helmet while riding on a motorcycle even though the person likely to be harmed by omitting these practices is only yourself. The rationale for these ukases is that the public at large is likely to bear the expense of the treatment for your injuries. In some communities this philosophy has extended to the ingestion of food substances which are believed to place the consumer at risk of obesity or circulatory diseases.

Yoani lives in a society in which every facet of one's life is controlled by the reigning political regime and the lifestyle of members of the ruling class occupy a strata far above ordinary citizens. This control extends to even access to the internet which we take for granted. The government prohibits home internet connections for all except its ruling elite and resident foreigners. In order to post on her blog Generación Y  Yoani must buy computer time at a tourist hotel. The hourly fee for such service is equal to one third of a month's salary for the average Cuban worker. Only in the last two years has the regime even allowed access to tourist hotels by citizens not employed in them.

This humble blogster has heard interviews and reports by visitors to Cuba who have returned to sing the praises of the "worker's paradise" in the Caribbean. For the most part these "visitors", be they celebrities or members of the Congressional "Black Caucus" are known as "useful idiots" by ordinary Cubans as well as those of us blessed by  having viewed the "Real Cuba" as described here , here,  here and especially here.

I urge all readers to visit Yoani's blog and especially to click on the tab in the tool bar entitled "how to help".

I love it. This is so simply put that I am surprised I never considered it before. The refusal to mature past adolescence and become a true, free, and sovereign adult has lead people to look for another master when their parents tired of looking after them. They found government.

As always an excellent posting.The
way you write is awesome.Thanks. Adding more information will be more useful.