"Heroes" Only "Minutes Away" 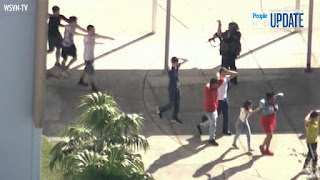 It turns out that Marjory Stoneman Douglas High School in Parkland, Florida, where 17 students were murdered on Valentine’s Day last week, did have an armed and uniformed school resource officer from the Broward County Sheriff’s Department. What was the Hero in Blue, a one Scot Peterson, doing during the shooting? Video shows that he heard gunfire inside the school, approached the school building, but never entered the building during the shooting.

“I am devastated,” [Broward Sheriff Scott] Israel said. “Sick to my stomach. He never went in.  [He should have] [w]ent [sic] in. Addressed the killer. Killed the killer.”

This is the same Sheriff Israel who appeared at last Wednesday night’s CNN anti-gun rally, er, “Town Hall,” advocating new gun controls.  More revelations about what the Broward County Sheriff’s Office did not do to stop the Parkland massacre:

Broward Sheriff’s deputies had multiple warnings that the 19-year-old was a potential school shooter, according to records released Thursday [today].

In November, a tipster called BSO [Broward Sheriff’s Office] to say Cruz “could be a school shooter in the making” but deputies did not write up a report on it. That came just weeks after a relative called asking BSO to seize his weapons. Two years ago, according to a timeline of interactions with Cruz’s family, a deputy investigated a report that Cruz “planned to shoot up the school” – intelligence forwarded to the campus deputy, with no apparent result.


His "backup" arrived just in time to have the school's inmates students removed with their hands up in surrender.