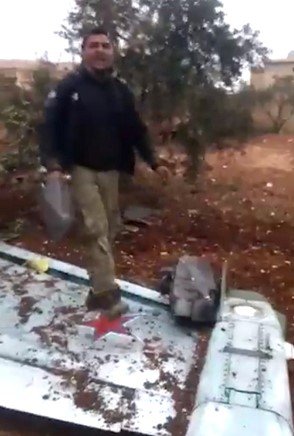 The Jaysh al-Nasr rebel group in Syria, part of the US-backed Free Syrian Army, has posted footage of its fighters celebrating the shoot-down of a Russian Suhkoi-25 jet fighter in the Idlib province of Syria. It is the first time a Russian fighter has been shot down by Syrian rebels attempting to overthrow the government of Bashar al-Assad in Syria.

The plane was apparently brought down by a man-portable air defense system (ManPADS) surface-to-air missile. According to press reports, the pilot ejected from the plane safely but was killed by the Syrian rebels on the ground.

The 2017 US military spending bill provided authorization for the Department of Defense to arm the rebels with shoulder-fired anti-aircraft missiles or ManPADS. At the time, the Russians vigorously objected to the dramatic US move to provide sophisticated weaponry to the rebels, claiming (rightfully it turns out) that "[t]he relevant decision also poses a direct threat to aircraft of the Russian Aerospace Forces..."

The scenario where a US-backed, US-supplied jihadist group in Syria uses US weapons to shoot down a Russian plane and then murders the pilot on the ground should be seen as a near-nightmare escalation, drawing the US and Russia terrifyingly closer to direct conflict.
Copyright © 2018 by RonPaul Institute. Permission to reprint in whole or in part is gladly granted, provided full credit and a live link are given.
at 10:32 AM