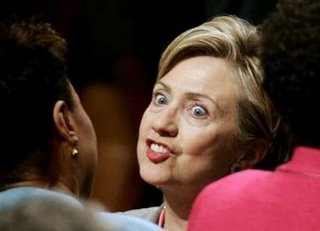 New York Sen. Hillary Clinton launched a charm offensive on Monday in a bid to counter charges from a top Republican that she sounds too angry to get elected president.

In a half hour news conference at a Head Start classroom in Manhattan, Mrs. Clinton took great pains to avoid sounding shrill as she urged the GOP to worry instead about "these devastating budget cuts [and] the confusion and bureaucratic nightmare in the prescription drug benefit."

The New York Times noted that Mrs. Clinton "spoke in even tones" to reporters and used "temperate phrases" as she "conveyed her displeasure at Mr. Bush's budget priorities."

The performance stood in marked contrast to attacks delivered by Hillary last week, where she accused the White House in harsh tones of deliberately delaying aid to Hurricane Katrina victims and charged that administration officials covered-up the health risks posed by contaminated air at Ground Zero in the days after the 9/11 attacks.

"When you think of the level of anger, I'm not sure it's what Americans want" in a president, he added.

The Times noted that the comments "amount to a new line of attack by Republicans looking toward 2008" - and that Mrs. Clinton seemed "well aware of Mr. Mehlman's remarks" as she spoke to the press on Monday.

If true, it's an attack for which the GOP has much ammunition.

Mrs. Clinton's outburst during a 2003 Connecticut fundraiser, for instance, is already one of the most replayed soundbytes on talk radio, helping to cement her "Shrillary" image with critics.

"I am sick and tired of people who say that if you debate and you disagree with this administration, somehow you’re not patriotic," she bellowed to the crowd.

Then, racheting up her nails-across-the-blackboard monotone by several decibels, Mrs. Clinton railed: "And we should stand up and say we are Americans, and we have a right to debate and disagree with any administration!”

Reacting at the time to the Mrs. Clinton's tirade, former White House insider Dick Morris observed: "She sounds like she's talking to Bill."

"Shrillary"....I like that. ;) Her thespian like charlatanism will grow only more entertaining as 2008 grows near. Perhaps she'll be talking in ebonics and rappin' for the black vote by then, (with Bill beatboxin' in the background)

You've been linked in a post about the two Hillarys.