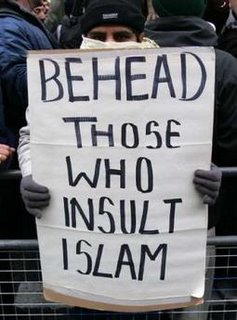 The following is extracted from an essay by Francis W. Porretto. He explains some of the reasons for the present state of affairs viz the islamist issue and offers a strategy for dealing with it.

In a landmark study conducted with exquisite care, Professors Richard Lynn and Tatu Vanhanen assayed the intelligence levels of 168 different nations. Their published results were too carefully arrived at to be attacked on objective grounds, so those who would have welcomed the chance to besmirch Lynn's and Vanhanen's methods, have largely ignored them.

One of the more ominous items from the study is that the average IQ of the world's Islamic nations is about 87.

The norm for worldwide IQ testing is, as it always has been, 100 exactly. That is, the average of the raw test scores of all persons worldwide, when averaged in the usual (i.e., the mean) fashion, is assigned to an IQ measurement of 100.

The central principle of a just and peaceful society is reciprocity. The greatest voices in history have spoken to this effect:

To grasp why these rules are as effective as they are, one must be able to generalize over both space and time: that is, one must be able to project the consequences of men's decisions and actions with fair accuracy. He who lacks the mental capacity to do that will conform to the Confucian and Golden Rules only insofar as he's compelled to do so by some other factor, whether it be empathy, law enforcement, or lack of imagination.

Islam exerts its greatest attractions upon the mentally subnormal. Persons who feel themselves inferior to others are forever looking for a rationale by which they might invert that relation. Islam, which not only nominates its adherents as the chosen of God but also gives them license to kill and subjugate "infidels" in God's name, is a perfect case. Small wonder that Islam's greatest gains among native-born Americans have been in inner-city slums and prisons. In contrast, Muslims of some intelligence, once freed from oppressive surroundings, tend to shed the uglier parts of their creed, usually remaining only nominally Muslim.

It is consistent with subnormal intelligence to respond to an open, generous hand by grabbing, pulling, and demanding more. It takes a modest amount of mental power to realize that this is more likely to convert that hand into a fist than to evoke a second offer of largesse.

By continuing to be openhanded and courteous toward the Islamic states even when we were insulted, obstructed, and attacked in return, we conditioned them, peoples and rulers both, to expect that they could wring even more generosity and accommodation from us by behaving even worse.

The mentally subnormal learn principally through conditioning. We conditioned the Islamic states into behaving as they do. Though American attitudes have changed and American responses have hardened since Black Tuesday, September 11, 2001, those of Europe have not.

Although I agree, I'm not sure IQ is the reason. First of all they are not good predicters of intelligience. I feel it comes from generations of being brainwashed at their mothers breast, and they have very little oportunity to both aquire different points of view and even less ability express alternate views. Any culture that suppress women, I feel, is automatically , going to lose much of it's rational thinking.

The IQ tests do not measure learned data (suppression of women etc.) The tests measure the abilities to PROCESS incoming stimuli in a meaningful and rational manner.

There just may be some merit in that. IQ tests are definitly not an exact science. Having taken many I can tell you that there are many different tests and they all seem to vary on both content and interpretation. You are correct that they are meant measure the ability to process incoming information and apply that information rationally to arrive at a solution to a presented problem. But even the creators of these tests will concede that the variables of learned or retained knowledge will cause fluctuation of scores from one test to another. They are however, VERY, accurate in determining whether a person is of average intellegence or not. The debate seems to come with the quantification of the surplus or deficiency. (How far below normal are they?) One thing is for certain though. An average score of 87 is significantly below the median and if even the most liberal margin of error were applied it wouldn't come close to reaching 100.

I think that the similarities between known behaviors and traits of individuals with similar IQ's and that of these nations as a whole are very interesting and certainly seem to prove the theory.

One more reason that Mullahs should have no nukes.

Breaking news from Finland: Qurans to fire demonstration day will be closer and closer

Deliver this message to other muslims ; ) and foreign news agencies!

Kansanedustajiemme oma blogi:
http://persekarpaset.blogspot.com/ our pigs will be done for food by this quran fire

I hate to belabor a point here but in my field, we have termed that is called " learned helplessness"
it means that you can actually condition people to be helpless and dependant by not allowing or challenging their abilities.
Think about this. A child is born in these countries. Their information is limited to narrow, hate filled views. They may hear of people who disagree, but those people are punished. Fear is established, fear of free thinking. Women, the moral compass in most societies are abused and voiceless.These people were created by the same Creator as all of us. They have been enslaved by the culture they were born into. This is the only reason that I agree with the war. It makes me sad that whole nations of people are robbed of their authentic selves because they are born into prisons, whose bars are borders and whose very existance are in the hands of madmen.

Faith: "This is the only reason that I agree with the war."

I like to think of my country as a peaceful one that does not attack foreigners who do not threaten its interests. There are many cultures with which I cannot agree. To the extent that they do not commit acts of war against vital interests of the U.S. they should be left in peace. When, however they do so, they must be dissuaded from such acts by ANY means necessary.

Qur`ans to fire in Finland and in Danmark said...

Winter war 1939 and 1941-1944 Russian invasions into Finland and occupation after those wars: