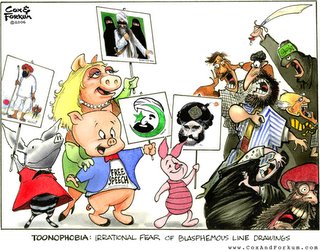 Not cited the Catholic example yet or do you only report on Muslim related issues?

Jamal,
Leonidas has yet to see ANY cartoon which justifies arson, murder or dismemberment.

Jamal's a Muslim who dislikes injustice and oppression. (according to his profile) So sawing heads off non-combatants, that's not injustice, huh? Oppression?? You take a look at any Muslim countries lately there, genius.

You are a perfect example of exactly what I expect from a Muslim...Someone who is unwilling to acknowledge barbarism and call it what it is, simply because it's perpetrated by Muslims. If Christians were running around sawing off heads and blowing up civilians or flying planes into buildings, I'd be the first one to call it wrong...out loud, without any fear because I spoke out against someone who misrepresented my faith.

So call a spade a spade, Jamal. Enough with the smoke and mirrors, pointing to Catholisism, etc. Say it once and for all and identify yourself for what you are...

Does Israel have a right to exist?

Is flying planes into buildings wrong?

Is sawing off heads of hogtied innocents wrong?

Is strapping on a bomb and blowing yourself up on a crowded street wrong?

Is storming and burning an embassy on its sovereign soil wrong?

Is threatening violence and beheadings and slaughter over a cartoon (whether offensive or not)wrong?

Is forcing your religious convictions on me, a free non-muslim, oppressive and wrong?

Answer up, dude. Let's find out who you are.

Hey Leo, nice of you to touch base. Thanks for the kind words.