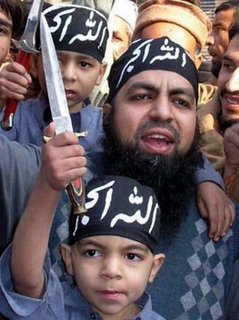 Now that the rest of the world has no choice but to witness the demonic, savage culture Israel has had to contend with for its’ entire existence, suddenly the times, they are a-changing! No longer are we hearing the politically correct mantra, “Oh, can’t them Jews and A-rabs jus’ get along and stop all that fighting.”
The Islamic Jihadiis are primitive but they do understand repercussions and power. They are trained and ‘educated’ in mosques. This might be an opportune time to remind the Imams responsible for initiating these ‘martyr missions’, that they also are vulnerable.

Now, Europe and the West are “hoping for negotiations that would avoid humiliating Iran and allow it to maintain its “national dignity.” Who is left standing (that is American) that thinks Iran has any dignity besides Jimmy Carter?

I’m waiting for the ACLU to rush in and sue the offending newspapers for bruising the feelings of the shocked Arabs. Even the self-haters and psychotic leftists seem to be slightly toning down their rhetoric. The scenes they are watching on television might only partially be the work of Karl Rove and have shocked some sense into their mushy brains.

Personally, I think that this just might be the time for Israel to seize the moment. They always have to, sooner or later. Instead of waiting for new directions for more road maps to hell, how about cutting off their implacable enemies’ electricity, water supply and access to Israeli hospitalisation and ship them back to their home in Jordan, Egypt, and Saudi Arabia so their “brothers” can show some love? Transfer is a logical word. Don’t fund them… don’t negotiate with them, don’t hire them, don’t befriend them… deport them! Defeat them! And keep in mind - since they revere death…give it to them.

This is the road to perdition. "Who's" is the only question. The free western democracies have (for now) a distinct advantage. Our military advantage goes without saying. Our troops are now battle hardened and more lethal than before this war on terror began. I'm talking about timing. Right now, time is on OUR side not theirs. We should act quickly and decisively to push these demonic Islamics back into hell where they belong....ALL OF THEM.

The Imams, Mullahs, and Ayatollahs have had more than enough time to show the world that these acts of terror are the works of fanatics and not representative of Islam as a whole. They've failed. Instead they continue to add fuel to the fire by preaching this hatred and violence in their mosques all over the world. Our soldiers patrolling the streets in Iraq listen to this hatred as it is broadcast on loudspeakers from the safehaven of the same mosques they use as storage for weapons and ammunition. Truck loads of Iraqis drive by chanting and shaking their fists in defiant resistance to the freedom we are trying to provide them.

I say if you bite the hand that feeds you, you don't get fed. It's us or them and we didn't set the terms. They will settle for nothing less than our total anihilation. Nothing will stop them except theirs. Forget nation building. We should sieze as payment, for our cost of defending the world, all they have that is in our interest. I have no sympathy left in my heart for those who suffered under Saddam. They're sheep...stupid cattle that will follow whichever Imam yells the loudest and they'll follow willingly to their own slaughter. Palestine is an example of what they would do with democracy and free elections. Such people do not deserve freedom. They deserve the slaughter they so desperately seek.

The threat to our national interest in the form of the Baathist regime in Baghdad has been removed (for the time being). The current threat is Iran which will have to be dealt with eventually. The main problem in the long run is the leftist/pacifist internal threat in the decedant western society in which we live which appears to lack the will to recognize any threat except the U.S.