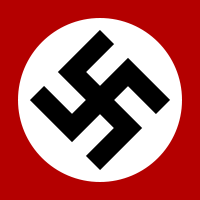 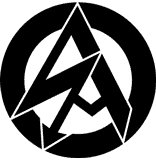 While the image to the right is readily recognizable,
that on the left is a bit more esoteric. Few these days have viewed the logo of the Sturmabteilung or SA who were the thugs that regularly disrupted gatherings and speeches in opposition to the National Socialist (NSDAP) party whose logo is represented on the right. Their tactics are today used for the most part by leftists who wish to silence opposition to the collectivist agenda in Europe and the U.S. The following is a typical example:

There was a university, some speakers and an audience. The speakers had been invited to the university in the name of intellectual debate and free expression. Some of the audience, however, would have none of it. Intolerant of the views being aired, they shouted-down the speakers and repeatedly called one of the black representatives “nigger.” Then, in a final fit of hatred and rage, in quintessential Brownshirt style, they stormed the stage violently, squelching voices that would have contributed to a fruitful exchange of ideas.

But what was the university? And, more to the point, who were the speakers and the audience? Were the guests communists or advocates for illegal immigration and the audience right-wing ideologues? No, not at all.

This fascistic display occurred at vaunted Columbia University, ostensibly a bastion of free expression. The speakers were with the Minuteman Project, the organization of citizen border sentinels. And the mob posing as an audience comprised those who despise such individuals: leftists. Leftists who did the Brownshirts proud. [...]

"Liberals" [yes those are sneer quotes] are afforded the right to speak mostly unfettered by disruptive voices, while conservatives are subjected to as much abuse as today’s Brownshirts can get away with dishing out.