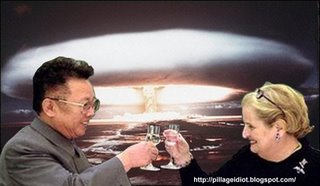 This picture, although photoshopped to include the mushroom cloud in the background is worth a thousand words. It records the toast closing the deal between the Clinton Administration and the Nork dictator Kimmie in 1994. As you may recall, the deal included construction of two nuclear processing plants in North Korea and other goodies paid for by U.S. taxpayers in exchange for Kimmie's "agreement" to "end" North Korea's atomic weapons program. Today we note Senator Clinton and other dhimmocrat politicians displaying the chutzpah of blaming the Nork's progress in atomic weaponry on Bush

"The Supreme Leader was a sweet little man who could be trusted to abide by a non-proliferation pact when Bill Clinton was president, but it only took six years for Bush to drive him completely nuts. It wasn't just the "Axis of Evil" remark, either. When the Shrub blew the lid off North Korea's secret nuclear weapons program, he forced the proud nation to brazenly continue what it had been doing discreetly under Bill Clinton for years. Our only hope is that a Democrat will be in the White House in two years, so that Kim Jong-Il will once again be a misunderstood yet reasonable man ready to sit down at the bargaining table with his American friends.

I don't expect Bush to thank Bill Clinton for Winning the Peace in North Korea. But Clinton should at least get the credit he deserves for insuring that no Americans will ever have to die on North Korean soil, but rather in the comfort of their own homes as long as they live within the blast radius."