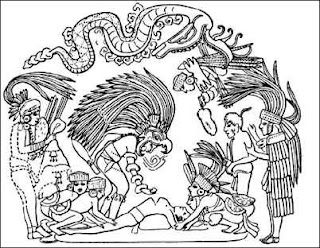 After President Bush's visit to Iximche, Guatemala today, Mayan "priests" will "cleanse the sacred site" of "evil spirits". Juan Tiney (or is it tiny?) the director of a Mayan nongovernmental organization with close ties to Mayan religious and political leaders, said Thursday. He stated "that a person like (Bush), with the persecution of our migrant brothers in the United States, with the wars he has provoked, is going to walk in our sacred lands, is an offense for the Mayan people and their culture,"
Tiney was not quite clear as to whether the site has been purified since the original Mayan inhabitants conducted their ritual murders there.

"After extraction of the heart, which was offered to the idol, the heads were put on poles on a special altar dedicated to this purpose, where they remained for some time, after which they were buried. The bodies of the sacrificed were cooked and eaten as sanctified flesh (Guillemin, 1969:27; 1977:258). Aspects of this religious complex show up in the human remains excavated at Iximche, the Kaqchikel Maya capital."

ΛΕΟΝΙΔΑΣ is curious if these religious ceremonies will be part of Tiney's "purification ceremony".
ΛΕΟΝΙΔΑΣ is no great fan of George Bush, but this seems a bit much even for the sufferers of BDS (Bush Derangement Syndrome)
hat tip: John Ray
at 1:22 PM