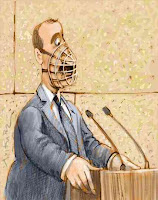 A NASA "scientist" who said the Bush administration muzzled him because of his belief in global warming recently acknowledged to Congress that he'd done more than 1,400 on-the-job interviews in recent years.

James Hansen, director of NASA's Goddard Institute for Space Studies, who argues global warming could be catastrophic, said NASA staffers denied his request to do a National Public radio [socialist] interview "because they didn't want his message to get out".

But Committee members advised him of the hundreds of other interviews he did that belie his broad claim he was being "silenced".

"We have over 1,400 instances that you've availed yourself [of to get your message out], and yet you call it, ... being 'stifled'," said Rep. Darrell Issa, California Republican.

Mr. Hansen responded: "For the sake of the taxpayers, they should be availed [?] of my expertise. I shouldn't be required to parrot some company line." Only the warmista, Kerry, Gore line!

Pretty funny. Not only does doing 1,400 interviews mean you are being silenced, but Bush is the one silencing you! You'd think it was Albert Gore saying this.