Could Use Some Global Warming! 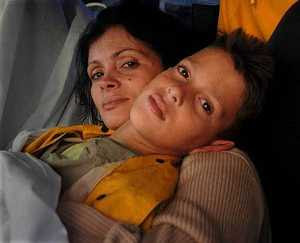 SAFE ASHORE: Lidia Estel Lugo, 34, huddles with her 9-year-old son, Jose Carlos Rodrigues Lugo, after wading ashore on Key Biscayne at dawn with a group of refugees from Cuba.

two groups of migrants walked up to the Key Biscayne toll booth this morning, where they received coffee and blankets from strangers.

The first group of five arrived at 6:30 a.m. That group included men, women and children.

Workers at the toll booth separating Key Biscayne from the mainland kept them warm and gave them coffee until the U.S. Border Patrol arrived. One of the five walked away but the others stayed put.

Four of the six in the latter group identified themselves as Lidia Lugo, 34; son Jose Carlos Rodrigues Lugo, 9; daughter Amanda Rodrigues Lugo, 15; and 13-year-old Mario Nuñez, who is not related.

An employee of Miami-Dade County let them huddle in his truck for warmth until the Border Patrol could return.

A Miami police sergeant showed up and summoned fire rescue. Fire rescue workers advised the group to take off their wet shoes and gave them blankets.

Lidia Lugo said they left Sunday from Cuba's Pinar del Rio. She declined to say how they made the voyage, only that they waded ashore.

She said she has a relative in Hialeah named Clara and the toll booth employee let her call Clara on a cell phone. The woman had the phone number memorized.

``Gracias a Dios,'' she said, shortly before the Border Patrol took her and the children away for processing.

Labels: benefits of a socialist dictatorship

That's really a beautiful picture. reminiscent of the National Geographic pic of the girl from Afghanistan.

Any idea what will happen to them?

Under the federal statutes, refugees from Cuba are allowed to remain in the US IF they manage to make it ashore on US soil. If they are apprehended before landing they are forcibly repatriated to the tender mercies of the Cuban govt. Recently a group managed to make it to an abandoned railroad bridge near Key Largo and were sent back as the bridge was no longer connected to land. More government bullshit!