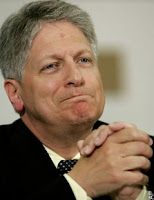 If Mr. Podhoretz of the New York Post is correct, the yearlong ordeal/farce of the 3 Duke University LaCrosse team members accused of multiple trumped up sexual assault charges will soon be ending.

March 23, 2007 -- IT seems that the trumped-up charges against three young men who played for the la crosse team at Duke University will be dismissed either today or sometime next week.

That will mostly end their ordeal, though they'll still have to deal with millions of dollars in legal fees (which, in the end, the city of Durham, N.C., will probably have to pick up).

The same can't be said of their false accuser - who is in a world of trouble, since you're not supposed to make false accusations to the authorities.

It will be interesting to follow the drama as it plays out and determine if justice will in fact prevail. It may well be that Mr. Nifong (pictured here), the prosecutor in the case will be disbarred by the North Carolina Bar association and forced to face charges of perjury. In addition, the President of Duke University will come under pressure to resign but as Mr. Podhoretz points out, the lynch mob consisting of a full 10% of the University faculty will skate free from any inconvenience.
ΜΟΛΩΝ ΛΑΒΕ
at 2:03 PM

This is very good news.