From the Socialist Paradise 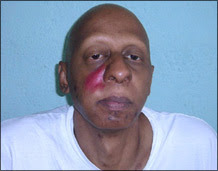 Guillermo Fariñas pictured here was recently arrested and beaten by officers of the National Revolutionary Police in Santa Clara, Cuba for among other things attempting to connect to the internet without government approval.

Nevertheless, Tania de la Torre was able to file this report by telephone before being cut off by Cuban State Security:

I want to inform the world about the current situation in Santiago de Cuba. There is a general state of alarm in the province because there is a shortage of milk for children. They have spent two months drinking tea, sugar water, and anything else that happens to come along.

There is not enough money, meat is nowhere to be found, and the situation is worsening because the dengue fever epidemic continues to spread. Additionally, the potable water situation is critical. There are neighborhoods that have spent six months without any. All this before the backdrop of Santiago’s broken streets and septic tanks that contaminate the environment.

We are calling upon the authorities, above all on State Security agents who are repressing and harassing opposition activists. We ask that they go over to the people’s side, because it is now Cuba’s time. It is the right moment to reflect and to help the Cuban people. To help the Cuban people is not to cooperate with the dictatorship and to do everything within one’s reach so that change may come about.

Note: At this point, State Security abruptly interrupted the telephone link between the independent journalist and the Cuban Democratic Directorate.

I wonder what the "Pastors for Peace," dear Congressman Rangel and his delightful colleague Ms. Waters, not to mention a slew of others (like the Congressional Black Caucus) would make of this. Actually, I don't wonder at all. They'd make the same of it as they have of the horrendous plight of Dr. Biscet, another extremely brave black man rotting in a hellhole of a Cuban jail for opposing the designs of the Plantation-Owner-in-Chief.
comment by:
asombra
at 10:42 PM

Labels: benefits of a socialist dictatorship

From Venezuela News And Views
Bloggers in jail, today Egypt, tomorrow?
from daniel-venezuela

Brave people in your post, and in Venezuela as well.

A warm welcome to fighting in the shade for our friends at the Cuban Ministry of Culture.

What do you think is going to happen, ΛΕΟΝΙΔΑΣ? Will the pendulum swing back towards sanity?

Rose,
I can't seem to locate my crystal ball.