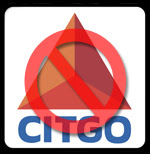 The time has come for those concerned with U.S. national interest to reject the Citgo petroleum marketing corporation, a wholly owned subsidiary of the Venezuelan Hugo Chavez government which has adopted an anti U.S. policy. The parent company PDVSA has been purged of all opponents to the Chavista regime and is now staffed with Chavez political supporters. The Chavez government continues its policy of communizing the Venezuelan economy by seizing private property in Venezuela and suppressing dissident opinion by closing down private and opposition media. As of Sunday 27 May 2007 the independent TV station in Caracas RCTV will be silenced for failure to toe the Chavista political line.
During the period 1985 1986 when ΛΕΟΝΙΔΑΣ was cruising in Venezuela the exchange rate was US $1.00/21.00 Bolivares. The present official rate is US $1.00/2150.00Bs with the black market rate as high as US $1.00/6000Bs. The current annual inflation rate in Venezuela exceeds 20%. (About equal to the Carter years in the U.S.)
Due to Chavez' price controls many items have disappeared from Venezuelan grocery shelves including sugar and cooking oil which are staples of Venezuela's poor. How long before toilet paper is a luxury item restricted to government appartchiks as in Cuba?

"Here's how Chavez economics "works." As petro-dollars pour into state coffers, the government takes them to the central bank to get new bolivars printed, which are then pumped into the economy through government spending. Mr. Chavez has also been regularly increasing wages. The result is a consumption boom. Under free prices, too many bolivars chasing too few goods would produce inflation that would show up at the supermarket checkout counter. But price controls make that impossible. Instead, serious shortages are emerging.

Producers have no incentive to bring goods to market if they are forced to sell them at unprofitable prices. Ranchers hold back their animals from slaughter, fisherman don't cast their nets, food processors don't invest in equipment and farmers don't plant. Those who do produce find it makes more sense to take their goods across the border to Colombia or to seek out unregulated (black) markets.

Importers also have little incentive to work these days even though the country needs food from abroad. Some things like wheat are not grown in Venezuela. Other products like milk, sugar and potatoes are imported to supplement local supplies. But the Chávez government has made it difficult to buy a dollar at the official exchange rate of 2,150 bolivars and if an importer has to buy dollars at the market rate of 4,000 bolivars it is impossible to make a profit under price controls. Even imports not subject to price controls can be difficult to find since import permits and licenses, as well as dollars, are hard to come by.

This is putting a crimp in more than just the food supply. According to local press reports, some 40% of the country's air fleet has been affected by delays in getting spare parts and the automotive industry's supply chain is hampered by a lack of access to dollars. Earlier this year hospitals began complaining that the servicing of medical equipment has been delayed because spare parts are not available. Hospitals are also reporting shortages of medicines for diabetics, antibiotics and hypertension drugs. Price controls on construction materials have damaged the reliability of supply.

The Venezuelan media is reporting that Mercal supplies are turning up for sale just across the Colombian border, where market prices prevail.

This is one of the methods of how the Chavista bureaucrats are financing their purchases of new Beemers and Mercedes Benz sports cars whose sales have gone through the roof during the last 4 years.
at 8:59 PM

Thanks you! As an American living here, I have tried to raise the awareness of the need to boycott Citgo!

Join the blogroll, Leo. It'll get you some hits. You write too well for people to just happen upon your site.