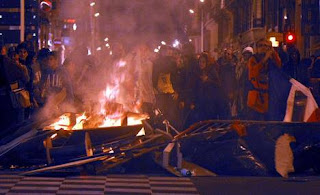 The "celebrations" across the nation continue subsequent to the victory of Sarkozy in yesterday's French presidential election. Le Figaro reports that only 100 vehicles were torched and a mere dozen police injured. It sounds as if the leftists who are unhappy with the outcome have yet to get up to speed. Fear not! Things could get interesting during the next few weeks in that bastion of western democracy.
The big questions in ΛΕΟΝΙΔΑΣ's mind are: Is this backlash the triggering event in a civil war? Where will the refugees flee to? (St. Barthélemy and St. Martin have already absorbed large numbers of those Frenchmen who have had the means to flee) Guadeloupe and Martinique are likely destinations. Stay tuned to determine if Sarkozy receives the G.W. Bush treatment.

I say let Quebec have them!