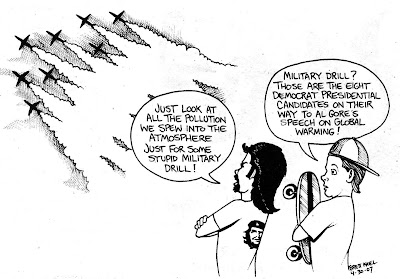 During the 1950s and 60s many youngsters of an impressionable age began exhibiting signs of "psychological" trauma due to being fed a regular diet of fear of thermonuclear warfare. These fears were fed mostly by the government schools through audio visual presentations and the weekly obligatory "drills" training them in the practice of "duck and cover" and evacuation to the nearest fallout shelter. The new fear being spoon fed to the younger generation by the "educational" system is the gospel as preached by the global warmistas.

“For many children and young adults, global warming is the atomic bomb of today…Parents say they're searching for ‘productive’ outlets for their 8-year-olds' obsessions with dying polar bears. Teachers say enrollment in high school and college environmental studies classes is doubling year after year. And psychologists say they're seeing an increasing number of young patients preoccupied by a climactic Armageddon.”

Since those earlier days we have continued to experience a steady increase in the intrusion by the various levels of government into every facet of our lives, from the regulation of the amount of water used for flushing toilets to the penalties for removing mattress labels. No activity has escaped the scrutiny and regulation by our so called "public servants". Additionally, the assertion that our leaders must be exempted from these onerous ukases is almost universally posited on the assumption that their efforts on our behalf must not be hampered. Hence Al Gore shuttles to and from global warmista presentations and his hideously pollution generating residence in a pollution-spewing private aircraft while crusading for our retrogression to an 18th century economy. All this is to be excused by the purchase of "carbon offsets" (warmista indulgences) from a corporation in which he is a major shareholder.

Since the warmista jihad cannot prevail on the basis of rational and logical debate, the opposing skeptics must be either ignored or silenced by threats and intimidation. The need to silence the skeptics recently became more urgent subsequent to a debate sponsored by the New York debating society Intelligence Squared

On the alarmist side of the debate were the Union of Concerned Scientists Brenda Ekwurzel, NASA climate modeler Gavin Schmidt and University of California oceanographer Richard C. J. Somerville [all dependent on government grants].

The skeptical view of global warming alarmism was presented by Massachusetts Institute of Technology meteorologist Richard S. Lindzen, University of London bio-geographer Philip Stott, and “State of Fear” author Michael Crichton, who is also a Harvard-trained physician and an instructor at Cambridge University and the Massachusetts Institute of Technology.

A pre-debate poll indicated that, by 2-to-1 (57 percent to 29 percent, with 14 percent undecided), the audience believed that manmade global warming was a crisis. But in the post-debate poll, the audience reversed its pre-debate views — the ranks of the skeptics swelled to 46 percent, the believers plummeted to 42 percent and the undecided declined slightly to 12 percent.

I'm going to purloin that pic, Leonidas. (with attribution) It's just too good to ignore.
Added you to the blogroll of Crusader Rabbit, by the way. If not ok, please let me know.