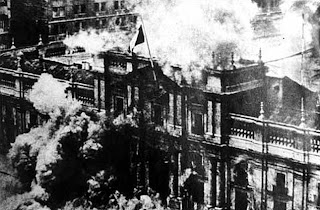 Salvadore Allende had been installed in that office after receiving a plurality (35%) vote in the Chilean presidential election of 1970; a fact glossed over in the leftist main stream media's incessant referral to him as the "democratically elected" president of Chile. Also glossed over by the leftist inspired puff pieces in the accounts of the events is the fact that the likewise "democratically elected " Chilean Congress ordered the armed and police forces of Chile to remove the President from power for a long list of violations of the Chilean Constitution and statutes. The vote was overwhelming (81 to 47) for removal of Allende. The entire text of the resolution is reproduced here and lists in detail the specific violations of the constitution and laws perpetrated by Allende and his marxist associates.

Uppermost in the accounts of the events of that day in 1973 is the official version of Allende's death by "suicide" as the attack on the presidential palace unfolded. Suicide is seldom the verdict wherein the cause of death is: "multiple gunshots to the head" as was the case with Allende. It was therefore the assertion that he utilized a Kalashnakov automatic rifle that had been presented to him by his close associate and mentor Fidel Castro. Such an act, although possible, almost requires the abilities of a contortionist. In any event the physical evidence of the scene is long gone.

Inconveniently for the veracity of the official version which glorifies Allende's "bravery", several eye witnesses to the deed have given a conflicting account which has been deeply buried by the world's leftist inspired press.

Patricio de la Guardia, an agent of Fidel Castro and direct [sic] responsible of [sic] Chilean president's security, waited [for] [sic] Allende returned to his writing-desk and [...] shot him in the head with a machine-gun burst. Immediately, he put on the body of Allende a gun - making believe that he was murdered by the military attackers and returned in a rush to first floor of the flaming building where they waited for other Cubans to leave. The group left La Moneda palace in complete silence and after minutes took refuge in Cuba´s embassy, located near [...] the palace.

Four Cuban members of the president's body guard were captured by the coup perpetrators and subsequently executed by firing squad.

The gist of the suppressed accounts is that when Allende foresaw the futility of resisting the attack on the palace by both the Army and Air force, he decided first to flee the palace and seek asylum in the Swedish embassy and when that proved impractical, to surrender. He was prevented from doing so by members of the Cuban secret service who had been installed as his body guard by Castro who insisted that the president should "die heroically defending the glorious marxist revolution".

Conveniently, many of the eyewitnesses to these events are deceased or safely in custody at the Caribbean island prison better known as Cuba. The account of the eyewitnesses linked above is translated from the original in Portuguese but is definitely worth reading in its entirety.

The coup doubtless had the tacit approval of the Nixon Administration, but the involvement of the CIA in the nuts and bolts of the operation to the extent put forth by the world press is questionable. In any event the estimated total of 3000 casualties of the coup which included mostly marxist activists as well as other leftist supporters, is a far cry from the number of victims of heroes of the leftist press such as Mao Tse Dung, Stalin and Pol Pot. We will probably never know for sure.

You are truly a veritable smörgåsbord of little known facts. Where do you store it all?