"War is Peace, Hate is Love" 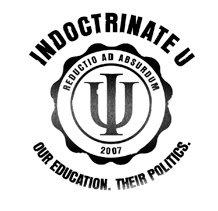 Let's see if we understand correctly the situation at Columbia University whose dean refers to the speech there today by Mahmoud Ahmadinejad the Iranian National Socialist (Death to America!) president as "robust debate". This statement follows the prohibition of a speech engagement at that hallowed institution of political correctness higher learning by James Gilchrist, one of the founders of the Minute Man project (to monitor illegal immigration at the U.S. border) and the continued banning of Columbia's ROTC program.

The characterization of the Ahmadinejad invitation as a contribution to "robust debate" would appear to be a good example of orwellian speak given the following restrictions placed on potential protesters:

First, students will not be allowed to bring protest signs into the session on security grounds. What a wonderful way to support free speech -- this mirrors the prohibition at Tehran University where students were arrested for showing signs at one of his speeches.

Second, students at Columbia need to give the University 7 days' notice to hold a protest rally. The administration conveniently gave them only 4 days' notice that Ahmadinejad was coming.

Third, it is unclear whether they will be able to ask questions spontaneously...they will apparently have to submit them in advance (though this isn't confirmed) so the administration can decide which questions get asked.

The dean further advises us that "Adolph Hitler would be welcomed to speak at Columbia were he alive." And all of this BS conforms to the current academic definitions of "free speech" and "robust debate".
Yeah Right.

Whenever Lee Bollinger steps down as Columbia's president, some poor fool will toast him for his "stirring" speech today, for speaking truth to power, blah blah blah. Nonsense. President Bollinger gave Ahmadinejad a microphone and a stage and then tried to use the underbilling to redeem his university's sorry complicity in the legitimizing of this fanatic's place in the world. Columbia can black out the backdrop and deliver stern lectures that go unheard in the Islamist world, but it won't remove the stain on its own reputation: It played a role of accessory to many lies today, delivered by a killer of our troops.

Fred,
As usual, Pat Buchanan is correct insofar as he goes. What he omits however speaks volumns. He fails to point out that Ahmadinejad was one of the "student" leaders of the capture of the U.S. Embassy in Tehran in 1979. He not only was positively identified by eye witnesses but photographs taken at the time prove that he was deeply involved in that act of war against the U.S.

I wonder why that doesn't get more play in the media - it is incredible. It surfaced, then disappeared. Yet many of the hostages swore it iwas him, and with facila recognition techology, our guys surely can prove or disprove it. They said he was one of the leaders, one of the worst.

You cannot prove ANYTHING to those who find it politically inconvenient or counter to their most cherished doctrines. Just read the comments on Fred's blog.