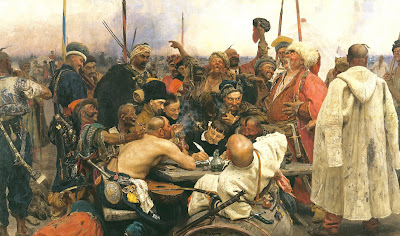 The following post including art work (click on image to enlarge) is lifted in its entirety from Turban Bomb, a Danish blog:

In these days, with the torrents of fatwa's and hailstorms of death threats, not to mention general grievance and self-pity from Muslims as reaction to various "insults" from Western infidels it's interesting to look back in history.
How did our forefathers react to the threat of Islam?

Well, Danish blogger Snaphanen brought my attention to one way of answering Muslim demands of submission.

Back in 1667, the Zaporozhian Cossacks defeated a Turkish army that had been sent in to the south of Russia. In spite of his defeat, the Turkish Sultan, Mehmed IV, sent a letter to the Cossacks, demanding their surrender.

As the Sultan; son of Muhammad; brother of the Sun and Moon; grandson and viceroy of God; ruler of the kingdoms of Macedonia, Babylon, Jerusalem, Upper and Lower Egypt; emperor of emperors; sovereign of sovereigns; extraordinary knight, never defeated; steadfast guardian of the tomb of Jesus Christ; trustee chosen by God himself; the hope and comfort of Muslims; confounder and great defender of Christians—I command you, the Zaporozhian Cossacks, to submit to me voluntarily and without any resistance, and to desist from troubling me with your attacks.


So, what were the Zapoes response? Well, first of all, they did not apologize for defeating the Sultan's invading army and thereby insulting the Religion of Peace. Their newspapers did not post editorials and op-ed's and commentaries demanding the resignation of the Government, large exporting companies did not bring full-page hand wringing adds in leading Muslim newspapers explaining how sorry they were for the insult to their customers.

Instead, the Cossacks looked at the rather pompous letter and decided to tell the Sultan to get stuffed.

A reply was written:

Zaporozhian Cossacks to the Turkish Sultan!

O sultan, turkish devil and damned devil's kith and kin, secretary to Lucifer himself. What the devil kind of knight are you, that can't slay a hedgehog with his naked arse? The devil shits, and your army eats. You will not, you son of a bitch, make subjects of Christian sons; we've no fear of your army, by land and by sea we will battle with thee, fuck your mother.

You Babylonian scullion, Macedonian wheelwright, brewer of Jerusalem, goat-fucker of Alexandria, swineherd of Greater and Lesser Egypt, Armenian pig, Podolian thief, catamite of Tartary, hangman of Kamyanets, and fool of all the world and underworld, an idiot before God, grandson of the Serpent, and the crick in our dick. Pig's snout, mare's arse, slaughterhouse cur, unchristened brow, screw your own mother!

So the Zaporozhians declare, you lowlife. You won't even be herding Christian pigs. Now we'll conclude, for we don't know the date and don't own a calendar; the moon's in the sky, the year with the Lord, the day's the same over here as it is over there; for this kiss our arse!


Quite an appropriate response if You ask me. Should be nailed on the walls in every Western Foreign Ministry.

Screw all this PC stuff and all this Sensitivity. Muslims are offended by seeing their Prophet in a drawing? So what else is new. Next case!

A less than polite way to say: ΜΟΛΩΝ ΛΑΒΕ and let's have another Tuborg!
at 10:23 PM

Fantastic stuff. Man, them Cossacks could cuss, couldn't they?

Hi. My name is Eugene Gershin. I'd like to welcome you to Obadiah Shoher's blog, Samson Blinded: A Machiavellian Perspective on the Middle East Conflict.

Obadiah is a pen name of a politician. He writes extremely controversial articles about Israel, the Middle East politics, and terrorism.

Obadiah advocates political rationalism instead of moralizing. He is economic liberal and political conservative.

Please help us spread Obadiah's message, and mention the blog in one of your posts, or link to us. We would greatly appreciate your comments at www.samsonblinded.org/blog

Great stuff! We need more of that right now.

That is priceless. I love it. I only wish modern politicians had the balls the cossacks had.

Agreed. Perhaps we should call them "Cod sacks" instead!