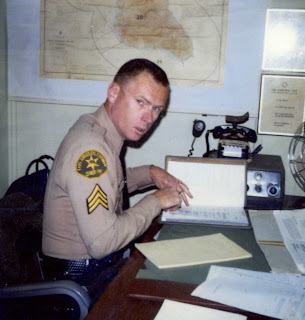 Most, nay all of us mortals suffer the slings and arrows of advancing years. In the last years of my fathers 91 winters I would make it a point to transport him to our ranch, Sparta, which overlooked the scenic Klamath River valley in northern California. Although he remained alert up to the end of his life he would often sit silent and uncommunicating, facing the spectacular view and saying nothing. I found his silence somewhat puzzling at the time, but lately, facing my own advancing years I have come to better understand my father's reticence as I reflect on a life spent both tilting windmills and witnessing the inevitable changes occurring over our allotted "fourscore and ten(?) years"

A recent post on Eternity Road has alluded to the bitter experiences of the Curmudgeon Emeritus and several commenters with members of that group society has charged with enforcing the myriad and proliferating statutes and regulations enacted by a political class whose sole raison d'entre is to exercise power over the citizenry and enjoy the concomitant perquisites associated with that power.

Your humble scribbler had the dubious "pleasure" of passing most of his productive years engaged in the enforcement of the aforementioned statutes and regulations, most of which involved no conflict with either common sense or the revealed moral duties of the run of the mill members of western culture. Occasionally one of such a profession is called upon to overcome his sense of justice and visit "retribution" on one who has caused no injury to his fellow man (so called "victimless crimes" come to mind). A case in point would be the "traffic officer" who is charged, nay compelled, to apprehend a citizen for no other reason than exceeding an arbitrary velocity in his conveyance without regard to the conditions extant impacting the peril to third parties. The underlying reason for this egregious violation of justice and common sense is revenue generation for politicians pure and simple. If a speeder or violator of other minor traffic infraction in fact created a danger to his fellow citizens he should be held to account by being charged with reckless driving. The arbitrary imposition of a penalty on a citizen who has not jeopardized the safety of another is unreasonable and most law enforcement personnel instinctively realize but seldom admit it. This is the reason you will encounter law enforcement officers engaging in "professional courtesy" to those they consider "brethren" although I suspect the practice is on the wane for reasons explained below.

Times have changed in the law enforcement profession since the advent of the "civil rights" movement of the last several decades. Hiring and employment standards have undergone significant changes as a result. Violations of traditional social mores or statutes often no longer preclude the hiring or retention of personnel. Candidates and employees who heretofore would have been rejected or terminated for psychological impairment involving tendencies toward abusing authority are no longer routinely culled. This is due in part to the administrative difficulties in documenting justification, especially if the subject is a member of one of our society's so called "victim groups". Physical standards have also deteriorated to the extent that agencies often can not deny employment to applicants on the basis of obesity, of diminutive stature or advanced age. Many agencies who heretofore required that applicants be capable of carrying an average size human body such as a partner or citizen a short distance for rescue eventualities can no longer discriminate on that basis. These and other policies have often been changed due to affirmative action requirements and the awards of substantial civil damages. Also contributing to the deterioration of law enforcement standards is the de facto existence of ethnic and gender quotas in employment as well as promotion. Civil rights activists are quick to condemn any perceived disparity in ethnic group representation among law enforcement personnel and administrative bureaucracies simply avoid such confrontations by implementing sub rosa quota policies.

When ΛΕΟΝΙΔΑΣ first entered the law enforcement profession in the mid 1960s, he was issued a copy of the California Vehicle Code which at the time seemed rather lengthy, containing nearly 600 pages. The current volume is a monster weighing multiple pounds. Additionally, when a motorist was detained for a minor infraction involving no harm to property or limb and found to be a fellow officer, the perp was invariably sent on his way with nothing more than a friendly rebuke. If the perp displayed lack of proper contrition or courtesy, the detaining officer usually sent a memo of complaint to the subject's employing supervisor resulting in disciplinary action far more inconvenient and costly than simply paying a fine at the local court house.

All of these and other changes, while not apparent to the everyday citizen and casual observer are often troubling for long time observers to ponder and are, I suspect, the subjects of my father's silent musings.
at 1:58 PM

'Tis not just the law enforcement profession that is suffering from said decline in physical and character standards. It is evident in all facets of public safety and is also quite apparent in the Military.

It makes one feel uneasy to consider the long term result of this decline. Our local Swat team gets more call outs today than ever before. In instances where beat cops would have previously pursued a suspect into a structure, they now hold short at the curb, almost as a matter of course and call in the specialists. No consideration seems to be given to the possibility of violent acts being perpetrated on innocents inside...only to the officer's safety. I have no quarrel with officer safety but one should enter into the profession fully expecting that they will encounter inherent risks associated with their job description. The line surrounding a police officer's duty to act has become "grayed" to say the least.

Where shall it end? Will we even be able to count on our constabulary to effectively thrust themselves in harm's way in effort to protect its citizenry in the future?

That reminds me, I gotta go buy more ammo. The .45's are getting some mysterious green residue in my apparently non-airtight ammo can.