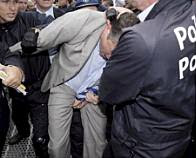 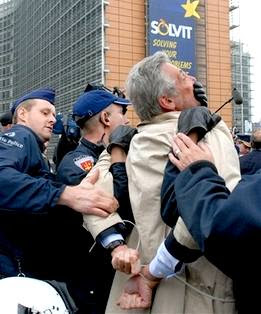 The arrest of scores of protesters last Tuesday in Brussels should set off alarm bells for those concerned with the future of liberty as it has heretofore existed in western culture. The major media have all but ignored the event and a major "libertarian" website Lew Rockwell has as yet even to report on it while recently publishing screeds by such notable "defenders" of liberty as Cindy Sheehan and the Clintonista apologist Sydney Blumenthal.

For those of you in the dark as to the suppression of basic freedoms of speech, assembly and petition in the European Union Capitol I will bring you up to speed. A group of European citizens recently applied for permission to demonstrate in protest against the continuing dhimmification of Europe and the submersion of Western culture by the uncontrolled immigration of adherents of the Muslim faith into the western European countries. That application for 11 September 2007 was denied by the socialist mayor of Brussels on the basis that the "public peace" could not be guaranteed by the Belgian authorities. Translation: We are fearful that adherents to the "peaceful" religion of Islam will become violent. All recent requests by socialist and Islamic groups to conduct demonstrations have been approved in that city including a group alleging that the Bush Administration was responsible for the attacks on the World Trade Center and Pentagon in September of 2001.

In any event, a small protest demonstration by so called "right wing, racists" was staged in Brussels on 11 September and was met with overwhelming force by the police apparatus of the socialist government there. The number of police appeared to considerably outnumber the peaceful demonstrators and the accompanying photos (courtesy of Gates of Vienna) are descriptive of the manner in which the demonstrators were treated.

I, for one am not holding my breath for answers to these questions that would indicate these demonstrators, often clad in 3 piece suits caused substantial damage to the "peace or property" of the citizens of Brussels or Europe.

I believe that the message here is a clear and frightening one. The demise and defeat of our culture which supposedly values liberty and democracy will not occur as a result of the violent actions of Islamists who have vowed to kill or convert us, but by the actions of their allied leftist political elite who will systematically eliminate the will and ability of the citizens to oppose or resist it by force. The process is well advanced as evidenced by the leftist control of important molders of our societal attitudes such as education and the media. As Davy Crockett stated on that fateful day at the Alamo in 1836: "It ain't lookin' good".

This is so-o-o-o sad. Just so sad. Because you are absolutely right. And there will be no coverage of this.

Hopefully, the remnants of the American Spirit will keep this from happening here. I think being born in Revolution helps us.

This is just terrible news.

The EU is a very dangerous organisation with a constitution more like the Soviet Union than the United States. There is no Senate, for instance, to supply the interests of the separate countries.

Knute,
Even though the "constitution" of the EU failed to be approved by the "governed"; as is common, the tyrants have managed a "workaround".
ΜΟΛΩΝ ΛΑΒΕ