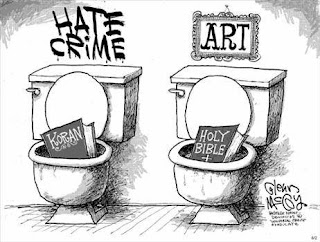 Of late, the enactment of so called "hate crime" legislation appears to be all the rage in the halls of the mostly two ring circuses we refer to as legislative bodies. These statutes generally pertain to one or another leftist designated "victim" group and boost the penalty for perpetrating ordinary crimes against members of those groups based on the mindset of the perpetrator. In ordinary language these are thought crimes. The list of protected groups is usually designated in the laws themselves. Prosecutions under such statutes are for the most part difficult due to many criminals failing to communicate their motivational rationale in such a way as to be obvious to a prosecutor. Occasionally however, the perpetrator will make statements that clearly reveal the motive for the crime to be his or her distaste for the group membership of the victim. One such case recently occurred in the environs of Chicago. Read the entire posting at Black Five for more data.

Marine Sgt. Mike McNulty is on activation orders to Iraq (second tour). On December 1st, 2007, Mike went to visit a friend in Chicago before deploying to say goodbye. In order to get to his friend's residence, and keep in mind that Chicago is a myriad of diagonal and one-way streets, the front entrance (right way) to the one-way street was blocked. Mike, being a Marine, overcame and adapted by driving around the block to the other end of the street and backing up all the way to his friend's place.

While saying goodbye, at about 11am, he noticed a man leaning up against his car. Mike left his friend's apartment and caught the man keying his car on multiple sides.
After [being] caught in the process, the man told Mike, "you think you can do whatever you want with Department of Defense license plates and tags". (In Illinois you can purchase veteran, Marine, or medal plates. Mike has Illinois Marine Corps license plates.) During the exchange, the perpetrator made additional anti-military comments.

This is as clear an instance of a "hate" crime as one can cite. The rub of course is that members of the U.S. military are not designated as a leftist protected group. Incidentally, the suspect, an attorney, after being apprehended in the act and offering to pay the insurance deductible of $100.00 for the damages, accused the victim of seeking prosecution due to the attorney being Jewish!

Clearly, in the Orwellian world of 21st century U.S. some groups are more equal before the law than others. This of course applies to suspects as well as victims. According to some so called "civil rights" organizations and many social "science" professors, members of certain designated groups by definition, cannot commit hate crimes.
at 4:51 PM

Great analysis of this horrible situation. Last I hear the perpetrator was late for court, and it wasn't looking too good for him. Any updates?

Check over at LindaSo's Something and Half for updates.

This little Uncle Fester looking bozo is not having a really good time right now.

Thanks Leonidas, for picking this up.