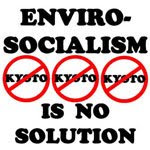 This global warming sure is a pain in the neck. In many parts of the nation the citizens are paying through the nose for home heating because the predicted warming has not alleviated the bitter and often record breaking cold. Some are wishing that Owl Gore's promise of steeply rising temperatures would lend a hand in stemming the flight of cash from their wallets caused by simply trying to avoid freezing to death. Strangely enough the prescribed cure for this supposed crisis is the accretion of more power (and taxes) to the very politicians who are responsible for the increases in the cost of energy which is necessary to warm our homes and businesses as well as transport the goods we require.

While our elected "leaders" are kow towing to the enviro nazis by removing sources of energy under US control from being developed such as Alaskan and offshore petroleum reserves and the vast low sulfur domestic coal deposits they are at the same time damning the "eeevil" corporations for price gouging as the costs of diminishing resources increase while demand is rising.

A large part of America's energy dependence on foreign sources can be traced to Sept. 18, 1996, when President Bill Clinton stood on the edge of the Grand Canyon on the Arizona side and signed an executive proclamation making 1.7 million acres of Utah a new national monument.[...] In fact, the declaration of 1.7 million Utah acres as a national monument, thereby depriving an energy-starved U.S. up to 62 billion tons of environmentally safe low-sulfur coal worth $1.2 trillion and minable with minimal surface impact, was a political payoff to the family of James Riady.

It would appear that the economic and political dumbing down of the government educated masses is paying off big time for our "progressive" friends as it is possible that this most corrupt duo may soon to be returned to 1600 Pennsylvania Avenue. Let me know when a progressive politician or one of their enviro nazi minders comes out in favor of constructing a non polluting nuclear power plant to aid in solving this serious situation. Meanwhile Ms Clinton characterizes as "pathetic" the efforts of President Bush to convince our Arab "friends" to increase petroleum production. How right she is!
at 8:29 PM

The term "environmentalist" is nothing but a cynical disguise for predatory litigious groups, who make their money suing the deepest pockets they can find.

And they do it all with impunity, as high priests pretending to the highest ideals, no one dares question their motives or criticize them. They use the good will and true idealism of the people for their own benefit.

Something is going to have to be done to bring them into some sort of accountability - proof of qualifications. oversight of testing methods and data, verification, and yes, penalties for fraud and deception.