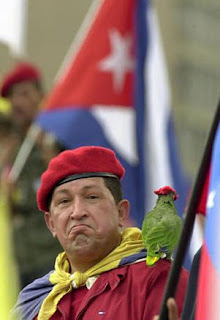 During some stays in Venezuela hiding from Caribbean hurricanes some time back while cruising aboard our sailboat Leonidas we had occasion to utilize the facilities of two boat yards in Puerto La Cruz and Puerto Azúl. During both of those instances requiring fiberglass work on the boat's hull we had extreme difficulty obtaining acetone which is needed to thin the polyester resin as well as for cleanup. The reason given to us for this difficulty was that acetone was used in the processing of coca leaves into cocaine. That was before the ascent of Hugo Chávez as president of Venezuela who is apparently a fan of the use of coca according to statements during a recent 4 hour speech to the Venezuelan Assembly.

I chew coca every day in the morning . . . and look how I am,'' he is seen saying on a video of the speech as he shows his biceps to the audience.

Chávez, who does not drink alcohol, added that just as Fidel Castro ''sends me Coppelia ice cream and a lot of other things that regularly reach me from Havana,'' Bolivian President Evo Morales ``sends me coca paste . . . I recommend it to you.''

Another uniquely Venezuelan solution to the problem of motorcyclists proceeding along the long lines of motorists stalled in traffic jams in Caracas robbing them at gunpoint is to prohibit two males from riding on any motorcycle anywhere in the country. One male OK. One male one female OK. Two females OK. You simply can't make this stuff up.