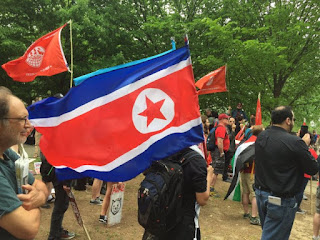 Owing to a formidable native facility for pessimism, I am infrequently surprised. Though three elements of the last few days did almost tease my brow to furrow.

The first was learning of the suddenly impotent nature of court orders. The Charlottesville right–as you know–came armed with one of these sacred writs–a thing we previously knew to enjoy the power to dictate national policy on every topic. Yet apparently court orders are sufficient only to compel modest functionaries like congress and the president of the United States, while having no power whatsoever over small town leftist mayors. Thus the injunction to allow the Lee Park assembly was summarily ignored, and the court was invited to sit on its thumb if they didn’t like it. I hope someone is noting that for precedent.

The second of these were the frantic and unanimous denunciations of the Charlottesville right by every Republican down to the Humboldt County Clerk. I understand these people are made to attack right like Swiss watches are made to tick, though the sheer Pavlovian reflexiveness and purple pageantry of their language was…well…typical, I suppose.

Though it should be mentioned, this wasn’t just the customary act of conservatives running cover for a left that vividly despises them. There was a cunning calculation in those lugubrious displays. The purpose of which was to scuttle their political competition so that the National Review transvestites could consolidate influence on the right and get conservatives back to losing graciously.

You’ll note that in comparison the left never attacks its radicals. It simply doesn’t acknowledge them at all, and suffers hearing aid failures whenever anyone asks. Thus those things with black masks and baseball bats flourish in the tacit approval of benign indifference. This is how you win generation after generation, by the way. Focusing attacks on your enemies rather than one’s own flanks has been proven since the campaigns of Clausewitz to be a successful tactic. Though certainly not one conservatives will lower themselves to learn.

The final item that has given me about a three volt shock has been the utter and absolute pass given to the left’s explicit communists. Now obviously arriving at such spectacles brandishing a swastika is breathtakingly stupid. Though it should be only slightly more stupid than waving a hammer and sickle. Yet there they are at every fetid left-wing riot without a peep of media reflection or demands of denunciation. I certainly don’t expect a democrat to object to symbols of murderous Bolshevism, though is it beyond the range of even rock-ribbed republicans to mention the fact between gasps about “white supremacy?”

That reminds me of the need to clarify media terms. A supremacist is one who wants a safe and harmonious home absent foreign squatters screaming about his moral infirmities into perpetuity. And CNN deploys other shorthand as well. For instance, teen means a black man of any age, as counterprotestor means a communist of any race. And fascists are whoever counterprotestors attack. It’s really no more complicated than that.