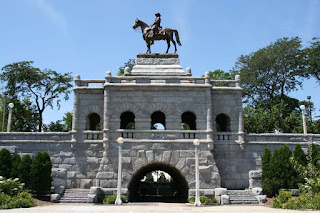 Before the War to Prevent Southern Independence Ulysses S. Grant and James Longstreet were best friends during their days as classmates at West Point.  Students of the war know that they both became famous generals — Grant being the commanding general of the Army of the Potomac, and Longstreet was Robert E. Lee’s right hand man, his “old war horse,” as General Lee called him. After the war the two men reestablished their friendship with President Grant appointing James Lonstreet to a job as some kind of railroad commissioner.

What few people know, however, is that Longsreet introduced his first cousin, Julia Dent, to Grant, and the two eventually married.  Before the war, Grant lived with his in-laws and was the overseer (“manager” according to the National Park Service Web site!) of the slaves on the family’s Missouri slave plantation.  As stated in this National Park Service site about the old plantation that was called White Haven, “the Dents, Grants, and an enslaved African-American workforce lived on the property.”  The slaves were not freed until they had to be after the Thirteenth Amendment became the law of the land in 1866.

How rich is it that Ulysses S. Grant’s slave plantation was called “White Haven?!”

So the man chosen by Lincoln to command the war “to end slavery” was a former slave plantation overseer.  Grant was not the first to be offered command of Lincoln’s army, however. The first man to be offered the job by Lincoln’s representative, General Winfield Scott, just before the war broke out, was U.S. Army Colonel Robert E. Lee, the officer whose troops apprehended John Brown at Harper’s Ferry.  (Lee’s wife, Mary Custis Lee, was a descendant of Martha Washington who inherited slaves who were freed by her husband in accordance with his father-in-law’s will).