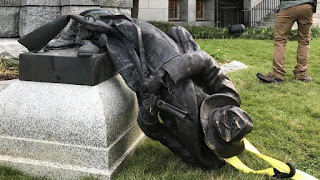 Only 27% of those living in America believe confederate statues should be removed. Well that’s nice; they’ll be gone by October. The people only get a vote in choosing who will choose; they have nothing to say in the choice itself. And our choices of who will choose have not reflected particularly well on our own interests.

As a result we have a very unpleasant road to travel, with no traditional buses in which to ride. The long march through the institutions was a successful flanking maneuver around a somnolent population. A population who is now awaking to a duplicitous media, a malicious tech oligarchy, an academia that produces antifa drones off an assembly line, and political representation that is desperate to get on the other side.

If you’d like one piece of advice, it would be to leave the churches that have left you, support the few businesses that have not, and find presentable candidates to primary practically every republican. By next November, I imagine most incumbents will be signaling their support for the Zebra murders.