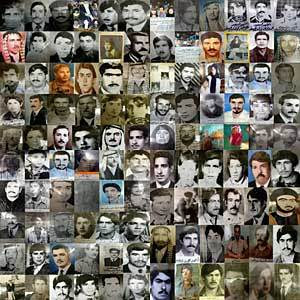 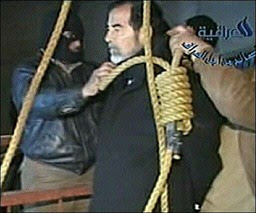 It seems that Saddam has now joined the ranks of the "unliving". As evidence we see the image below left as his sentence is carried out by the Iraqi government. The image on the right is a collage containing the photos of a small number (148) of his victims from Dujail.

"Criminal Saddam was hanged to death" - Iraqi state TV. Saddam Hussein was executed around 10 pm ET (Al Arabiya reports the death at 10:05 ET). Two other Hussein-era officials, including his half-brother, have not yet been executed and remain in U.S. custody, according to Iraqi officials quoted by CNN (edited). The Associated Press has a summary of the convictions and sentences in the Hussein trial.

Saddam Hussein was a longtime state sponsor of terrorism, and during his reign, Iraq was listed by the State Department on the official list of "state sponsors." Iraq was added to that list in 1990 following its invasion of Kuwait and also for providing bases to the Mujahedin-e-Khalq (MEK), the Kurdistan Workers Party (PKK), the Palestine Liberation Front (PLF), and the Abu Nidal organization (ANO). Following the 2003 liberation of Iraq from Hussein's rule, U.S. sanctions applicable to state sponsors of terrorism against Iraq were suspended, and President Bush announced the removal of Iraq from the list on September 25, 2004.

More details of his ties to terrorists have been developed since the 2003 liberation. Saddam funded Palestinian suicide bombers through an account in Rafidain Bank in Jordan (see chart of the payments released by a U.S. House committee in January 2005 only to this site). He also funded the Abu Sayyaf terrorist group in the Philippines. I discussed other possible ties to Palestinian and other terrorist groups in numerous posts, which are best summarized in one post on November 3 and another on March 31.

The execution will have no impact on the current situation in Iraq, other than being cited as another excuse for more terrorism by Sunni insurgents. But Saddam was a mass murderer and a tyrant. To the best of my knowledge, he was the only ruler in the past 50 years who used chemical weapons on his own people and against another country. In a statement, President Bush noted that Saddam received the fair trial that he denied his victims. You can see a summary of his atrocities on the Fox News site, which reports, "Hundreds of thousands of people died as a result of Saddam's actions." His death is a victory for the rule of law in Iraq and for the civilized world.

The phrase “Saddam was a bad guy, but™” is a registered trademark of the Democratic National Committee. All Rights Reserved.

ΛΕΟΝΙΔΑΣ said...
This comment has been removed by the author.
10:03 PM