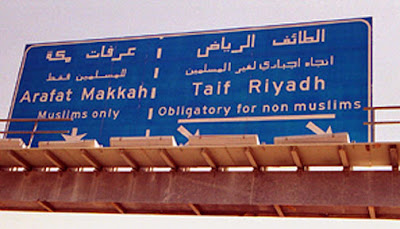 In his latest screed, the U.S.' (worst) and ex president castigates Israel for supposed "apartheid" policies toward the Arabs residing in the conquered former Jordanian territories of Samaria and Judea. Carter neglects however, to acknowledge true apartheid where it in fact exists.

Back to life from jaws of death in Saudi Arabia

Losing one’s way in Saudi Arabia could mean losing one’s life. Jojo Joseph, 31, a native of Mariyapuram, India stumbled on this great truth on Monday. What saved him from the sword was the timely intervention of the Indian Government.

Jojo, an employee of an electronic firm in Jeddah, Saudi Arabia and who had gone to a place near Medina to see his wife Sheeba, a nurse, and their new-born child lost his way and ended up on the road to Medina.

Jojo, who did not know that the road was out of bounds for non muslims during the pilgrimage season, was arrested by the police at Al-Azeez, a place near Medina. The Saudi religious court ordered that Jojo be beheaded at noon (IST) on Tuesday ‘for trespassing into the area.’

Jojo conveyed the news to his family in India who contacted Indian Opposition Leader Oommen Chandy.


Chandy spoke to Jojo on his cellphone who gave him the name of the police station where he was lodged.

At the instance of the Prime Minister’s office, the External Affairs Secretary contacted the Saudi Government and convinced the authorities that Jojo had lost his way and that there was no ulterior motive in moving along the road.

Israel does not even execute convicted murderers and terrorists but is always cited as morally equivalent to adherents of the Religion of Peace™ who target Israeli civilians or execute lost motorists.