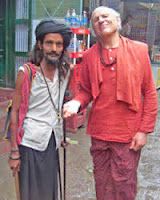 ...that the road to hell is paved with good intentions:

Despite an intensified campaign against poverty, World Bank programs have failed to lift incomes in many poor countries over the past decade, leaving tens of millions of people suffering stagnating and even declining living standards, according to a report released Thursday by the bank's autonomous assessment arm.

Just like much of Western foreign aid and charitable aid, the 'aid' the World Bank seeks to deliver is not having the desired effect because handouts or policies promoting government largeness do not address the root of the problem of poverty in the world. Poverty exists because poor countries are run by criminals and have large, expansive, and intrusive governments.

Overall, between 1990 and 2002 the percentage of the world's people who subsist on less than one dollar per day declined from 28 percent to 19 percent, according to World Bank research. But officials with the evaluation group noted that much of the advance was registered in China, which has rejected many of the tenets of the development model advocated by the West while relying hardly at all on the largesse of the World Bank.

Want to alleviate poverty? First step, kick the World Bank out of your country.
The second step: "For God's Sake, Please Stop the Aid!" The Kenyan economics expert James Shikwati, 35, says that aid to Africa does more harm than good.