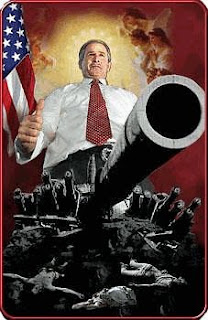 ΛΕΟΝΙΔΑΣ is beginning to believe he has not been keeping up to date with the latest "new-speak". Apparently the word "war" (both noun and verb forms) has undergone a change over the recent half century. Until early 1979 it was an act of war to seize and occupy a foreign nations' embassy and diplomatic personnel and refuse to release them. In 1979 the Islamic Republic of Iran accomplished both of those acts against the United States and therefore a state of de facto war has existed between the U.S. and Iran since that time.
Those acts of war, instead of eliciting an traditional response, caused the idiotic then president of the U.S. to deem it appropriate to festoon the nation with miles of yellow ribbon and whine for "talks" to resolve the crisis. The important priorities seemed to be to give away the Panama Canal and don sweaters in order to offset the oil embargo as well as wait in long gas lines and complain of an American "Malaise".
The more things change, the more they remain the same. During the middle years of the Viet Nam "war" the president of the united States insisted on approving the targets to be attacked which resulted in hours and even days of delay. Consequently by the time such approval was debated and approved the "targets" were most often vacant real estate.
Apparently we have not learned the necessary lessons of these idiotic practices as evidenced by the recent revelations that combatants engaged in actions against U.S. military forces in Iraq have included members of the Iranian Revolutionary Guard who have escaped death or evaded detention of more than a few days due to the "rules of engagement" which were: "catch and release".
Mr Bush has finally come to the realization that the situation (war? in Iraq) as a result of among other factors, his rules of engagement, has evolved into a political disaster of enormous proportions and has decreed that heretofore combatants of Iranian nationality will be treated as true combatants instead of suspects of misdemeanor crimes.
Another instance of idiotic "rules of engagement" is the incident of the two Border Patrol agents who are now imprisoned for aggressive attempts to apprehend a major Mexican drug smuggler which resulted in the Mexican criminal being wounded by a gunshot in the ass. Instead of being allowed to use the force necessary to apprehend a felon engaged in the commission of a serious crime, the Administration's rules of engagement are designed to allow the criminal to escape across the border unmolested. The agents realized this and attempted to cover up their actions even though any reasonable citizen would understand that their efforts were justified by common sense.
From a personal perspective ΛΕΟΝΙΔΑΣ does not care if the Mexican criminal smuggled several tons of marijuana into the U.S. but the fact remains that our rulers have designated such activities as major crimes and now punish their own agents for enforcement.
If ΛΕΟΝΙΔΑΣ were a Republican or Democrat, he would be extremely embarrassed.