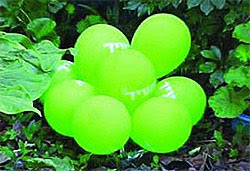 An Israeli promotional campaign involving balloons caused panic among Lebanese civilians Saturday when the wind carried them over the border into southern Lebanon.

The Lebanese media reported that some civilians were hospitalized after inhaling the gas in the balloons.

The AP will doubtless recruit the green helmet guy to drag out some corpses for a photo op.

However, the photographs published on the Web site of Hezbollah's TV station Al-Manar show green balloons from a promotional campaign for Ha'ir, a Schocken group newspaper.

Lebanese sources said the balloons reached the southern Lebanese cities of Nabatiyeh and Tyre, and the Lebanese army warned civilians not to touch them. Some were brought to Italian UN troops for examination.

The Italians must have laughed their asses off.

In order to understand the Arab/Muslim mindset which most of the world has bought into consider the question posed by the Arab Walid Shoebat: "Why is it that on June 4th 1967 I was a Jordanian and overnight I became a Palestinian?"