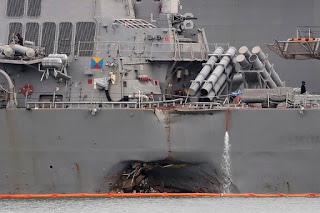 After years of promoting "social" experimentation in various branches of the US military, the Navy at least has finally discovered that competence trumps politically mandated social policies.

More sleep and no more 100-hour workweeks for sailors. Ships steaming in crowded waters like those near Singapore and Tokyo will now broadcast their positions as do other vessels. And ships whose crews lack basic seamanship certification will probably stay in port until the problems are fixed.
All seemingly obvious standards, military officials say, except that the Navy only now is rushing the remedies into effect after two collisions in two months left 17 sailors dead, despite repeated warnings about the looming problems from congressional watchdogs and the Navy’s own experts dating to 2010.

“Many of the issues we’re discussing today have been known to Navy leaders for years. How do we explain that, Admiral?” Senator John McCain of Arizona, the Republican chairman of the Armed Services Committee, demanded of Adm. John Richardson, the chief of naval operations, at a hearing last week.

“Senator, there is no explanation,” Admiral Richardson said.

This humble blogster hastens to disagree. With the skyrocketing instances of shipboard pregnancies and the general lowering of competency standards due to affirmative action it is no surprise that avoidable incidents are proliferating.