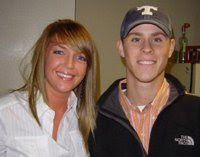 Not News from Knoxville, TN
It's always interesting what the msm deems "news worthy". For instance, look at the coverage the Imus affair received. You would have thought this Imus character burned down the White House, he was a headliner for a week. And the Duke lacrosse case, that's another strange one. That was on the news full-time until the case started unravelling, then when it was clear the "suspects" were innocent, news organizations ran from it like it was typhoid fever. Even Jesse Jackson acts like he's never heard of it (he still hasn't apologized to the "suspects" for inferring that they were rapists).

What doesn't the msm deem as news? Stories like this:

These two left above were out on a date minding their own business when they were car jacked and this is what happened to them.

The animals pictured above right raped Christopher Newsom, cut off his penis, then set him on fire and fatally shot him several times while they forced his girlfriend, Channon Christian, to watch. An even more cruel fate awaited her!

Channon Christian, was beaten and gang-raped in many ways for four days by all of them, while they took turns urinating on her. Then they cut off her breast and put chemicals in her mouth … and then murdered her.

Ask yourself the obvious question: If this was four white people that did this exact same thing to a young black couple, would this be front page news? Simplify it even, do you think this is newsworthy? If it is newsworthy, where is CNN with the coverage, or the NY Times, or any of the msm? Their silence speaks volumes.

Also, keep in mind that this happened February 1 of this year, so the story has been kicking around for nearly three months, yet not a peep from the msm, or for that matter, Jesse Jackson and Al Sharpton.

The attackers were black, the victims white. That's all the explanation for the silence anyone should need.

Not only are there people who condemn those of us who want our right to bear arms respected, the same people condemn whites who fear this sort of savagery, link it -- correctly -- with the Leftist establishment's ratification of "black culture," and want to live among their own kind for their own safety's sake.

I'm dreaming of a fortified mountaintop.

Fran,
Re: that "fortified mountaintop":
We had one but had to leave it in late 2004. Pick a place for it that ain't Kalifornia.
http://fightingintheshade.blogspot.com/2006/03/true-california-horror-story.html

Leo, I know I'm preaching to the choir but as you are sorely aware from your years in LE, It staggers the mind what doesn't make the news, EVERYDAY!

Racism is only officially defined in one direction. If it occurs in the other direction, it is called other stuff, like "by any means necessary" or "frustrated, underprivileged class lashing out" I've heard those explanations by the media here locally.

So often, when they do report on these types of stories, no mention of the assailants being black is made....even though their pictures are plastered all over the screen, and it's obvious that several black people murdered or raped one white woman, THERE IS NO VERBAL MENTION OF COLOR. If these people had reacted defensively to save their lives and shot these bastards, there'd be NAACP and RPC folks coming from out of town to accuse them of racist violence.

The more I read this crap, the more I'm in favor of the concept of "equal but separate." You didn't here of this kind of crap as often when the railroad tracks used to be "the line" that divided the town.

This makes me very mad, these animals are human feces, anybody who disagrees is either insane or human garbage...