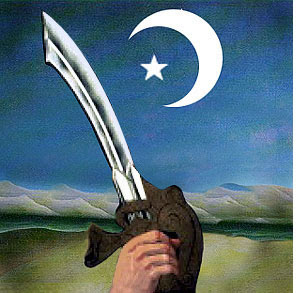 There are many U.S. citizens who daily go about their lives in blissful oblivion to a process that is slowly but inexorably overtaking our society. Few "educated" members of society, due mostly to the government controlled schools, realize that the operable document that established our nation over 200 years ago, the much "revered" Constitution is more or less a dead letter. One flagrant example of this is the routine violation of the Second Amendment whose operative phrase "....the right of the people to keep and bear arms shall not be infringed." Tell this to the residents of our nation's capitol, New York City or Chicago.

Most of us are aware of the separation of church and state that has been interpreted by the courts to remove all trappings of Judeo Christian religion from the public domain. There is however, a movement gaining momentum to establish a state recognized, eventually mandated religion. Islam.

One of these recent submissions to Islam involves a Minneapolis Target store. Muslim Target checkers refuse to scan any pork products. Due to the recent Muslim cab driver flap, one can only assume this refusal-to-touch-or-scan also applies to any products containing alcohol. Instead of advising the Target Muslim checkers that scanning pork is part of their jobs, Target accommodated their demands. The retail giant has either transferred the Muslims to other duties or a non-Muslim employee is called to scan the items. Question: Are Jewish Target employees afforded the same treatment, when they must handle pork? The answer is, of course, no. Singular privilege applies only to Muslims.


Another surrender to Muslims’ demands was recently announced by Minneapolis Community & Technical College. In what appears to be a direct violation of the US Supreme Court’s Justice Black 1947 interpretation of “separation of church and state”, the college has allocated tax-payer funds to build on campus foot washing basins for Muslims preparing for prayer. The school is also said to be involved in negotiations with Minneapolis’ Muslim leaders to, also, establish an on-campus Muslim prayer room. Of note is that Christian symbols and celebrations are banned on this campus but, the Islamic Muslim religion is now embraced and given—yet again—“special privileges.” Separation of “mosque and state” does not apply.


Questions: Does anyone see a developed pattern of capitulation to Islam in the state of Minnesota? Will Minnesota cities, as have already been implemented in Michigan cities, soon have calls to Islamic prayer broadcast to their citizens?

Another example of the Islamic strategy to eventually install their own religious laws, which will trump and replace US laws, within the USA involves MAS’ Washington DC based Muslim Accommodations Task Force (MATF). MATF states its mission as: “To help make campuses more “Muslim-friendly” by documenting existing religious accommodations and facilitating emerging ones. Over time, we will be able to rank colleges and universities on “Muslim-friendliness” and publicize our findings in the media and publications.

Although the provision of special religious accommodations is legally disallowed by colleges and universities they are, nonetheless, being implemented by these schools. Is this simply another example of our leftist-bent school system applying laws only if it agrees with them? It appears so. As we have viewed for several decades, all things Christian are being removed and banned. However, all things Islam are now being embraced—in violation of US law. But, after Islamic fundamentalist Shari’a law is installed in our court system—US law will be moot.

The leftist controlled academia and media, due to their commitment to multiculturalism and cultural Marxism are complicit in advancing the destruction of our republic.

Islam is the bane of our existence. A cancer that rapidly infects the entire planet, they understand only one concept...their elitism and our subservience. They will continue to force their system of beliefs upon us by latching onto the government's multiculturalism tit as long as blind, lazy, PC, offended, spineless Americans allow them to do so.

I pointed out the facts at eternityroad (yes, I am that "Anonymous"). I guess those facts won't change your mind though. I see you pretend to be a retired law enforcement officer. Well, no wonder you are a racist cunt.

You should have seen "Anonymous's" original comment, before I bowdlerized it.

Ad Hominem...(sigh) typical. Doesn't it get tiresome of trying to watch them debate. It's like watching a monkey "copulating" with a football.

Cowards, every stinkin' anonymous one of them.