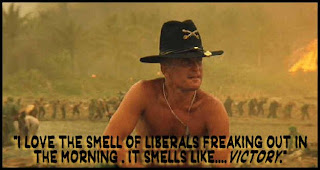 Fresh from yesterday's obscene shoeless groveling (his wife was mercifully out of town or she would probably have shown up in burqua or head scarf. That is, if she were permitted in the building.) at the Washington mosque President Bush pronounced his "disappointment" on the failure of the Senate to pass his comprehensive amnesty bill. The first clue that the bill was a disaster was that it was the illegitimate brain child of the Senate's most anti liberty Senators, McCain and Kennedy. That the Democrat leadership in the Senate crafted it in secret and attempted to ram it through to passage before even the Senators were accorded time to read it was the second clue. Compounding the fiasco, was President Bush attempting to twist the arms of opposing Senators to support the travesty. Apparently he does not realize that he is a lame duck who, by attempting to appease his enemies has thrown away any political capital he retained after surrendering to the left on issues such as the campaign finance law, Kennedy's huge expansion of federal oversight of the public school system and the implementation of the government prescription drug scheme. All of this is on top of mismanagement of the conflict in Iraq. Mr Bush, in his pronouncement of "disappointment" goes on to insult our intelligence in his formal statement:

"I thank the members of the Senate and members of my administration who worked so hard on the border security and immigration reform bill. I'm sorry the Senate was unable to reach agreement on the bill this morning. Legal immigration is one of the top concerns of the American people and Congress's failure to act on it is a disappointment. The American people understand the status quo is unacceptable when it comes to our immigration laws. A lot of us worked hard to see if we couldn't find a common ground - it didn't work.

Mr. President, the Senate didn't "fail to act". It sent the monstrosity to where it belongs, to the rubbish heap! What is it about the American people observing a failure to enforce the law as a ploy to achieve the political objectives of special interest groups that Mr. Bush does not understand? Even an idiot understands that years of failure to enforce the immigration laws already on the books is the real source of the people's rage. It's the ENFORCEMENT stupid, and enacting more laws while refusing to enforce existing ones is so transparent that even the most obtuse cannot be fooled.

Mr. Bush has lost what credibility he may previously have possessed. It could only be worse if he abandoned the nation to the tender mercies of "The Religion of Peace". Oh. I forgot. He has started down that path already.
ΜΟΛΩΝ ΛΑΒΕ!!
at 5:34 PM