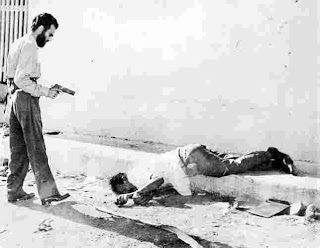 I'm not sure when the public release of Michael Moore's latest "documentary" Sicko for public viewing is scheduled, but in it he alleges that: "Despite its poverty, ... Cuba's healthcare system is a model for the Third World."

It is unclear how much time Mr. Moore spent inspecting the health care systems (yes, that's plural) in Cuba but it is likely that his government minders insured that he viewed only the facilities accessed by hard currency paying foreigners and Communist Party aparatchiks and not the system which ordinary Cubans are forced to endure.

Mr. Moore, like most of the Hollywood leftists such as Ed Asner, Harry Belafonte, Danny Glover, Steven Spielberg, Jack Nicholson and others visit the island prison and are guided around the upscale resorts and commercial ventures constructed by foreign (mostly Spanish) investors from which the Cuban population is excluded (apartheid?). They return to sing the praises of Castro's "egalitarian paradise".

These leftists, whom Lenin termed "useful idiots", for the most part neither speak Spanish nor have ever conversed unsupervised with a Cuban who is forced to subsist on the food allowed by the government "libreta" (ration book).

The rationing of virtually all food products in Cuba has been in effect since 12 March 1962. The official Castro government position on the reason for imposing a food rationing system in peace time and for the past 45 years is to blame the economic trade sanctions imposed by the U.S. which it insists on characterizing as a "blockade". Although Cuba is not blockaded and is able to trade freely with over 195 nations, the food crisis is the fault of the U.S. government. Since 2001 U.S. limited agricultural trade with Cuba has been allowed but with no sign that the rationing system there will end any time soon.

In early 1990 we cruised the north coast of Cuba aboard our 34' sailboat from near Mariel to Puerto Samá and had the opportunity to observe first hand the conditions under which Cubans live (see here, here and here). Prior to 1990 the soviet bloc was subsidizing Cuba to the tune of U.S. $600.00 per year for every man woman and child living on the island. The Cuban standard of "living" has deteriorated substantially since then.

We were docked for several days at the Marina Hemmingway near Havana and viewed a propaganda program on Cuban TV praising the recent huge crop of tomatoes. There were shots of tomato fields nearly as far as the eye could see. We had been unable to obtain any tomatoes even at the diplomatic store and there were no tomatoes available anywhere. I questioned one of the marina workers as to the reason for this situation and he advised that the tomatoes were rotting on the vines because the Russians had failed to ship the wood for the shipping crates. Oh, the joys of a socialist economy. We have visited and spent time in the majority of the Caribbean island nations, They all have soil and climate ideal for the production of agricultural products and meat. Cuba is the only one that needs to impose food rationing on its people. It will probably not be long however before it will be joined by Venezuela

The list of inconveniences for Cubans goes on and on: take your own glue (if you can MAKE it) to the post office as the stamps lack adhesive; and toilet paper, tooth paste and matches are only available to Communist Party members and foreigners.

Our home grown environmentalists (socialists) have severely restricted the petroleum industry here in the U.S. due to concerns over "pollution". There is no problem though in the socialist paradise of Cuba. Most of the few oil wells that are producing are not properly maintained and are leaking crude oil into nearby creeks which flow into the sea. Most of the motor vehicles on the streets (mercifully few however) lack any form of pollution limiting devices and belch copious clouds of noxious fumes. How many of you gentle readers were aware that Cuba has oil fields? One must assume that their local enviros are currently serving their sentences in one of the prisons of the Archipielago de los Canarreos.

You can compare this hell on earth to the pre revolution situation here and here.
The above graphic shows "Che" Guevara doing what he does best