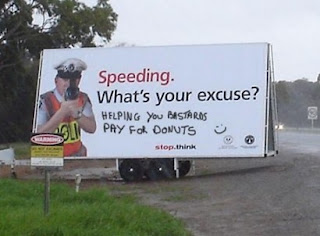 Most of us take for granted without giving it a second thought that traffic laws are in place in order to ensure safety. Nothing could be further from the truth. How many of you, while driving down the expressway or for that matter any roadway, have noticed that you were safely keeping up with the flow of traffic but exceeding the posted speed limit by several or a dozen+ miles per hour? The reason for this is simple. Unless human beings are irrational or under the influence of a substance they instinctively act in such a way as to assure their own and others' safety. This fact is one of the basic rules of sentient creatures' survival strategies. No one but a fool or a substance abuser (redundancy alert) will operate a motor vehicle or other dangerous machinery in such a way as to risk harm to themselves or others. Why then, are speed limits enacted and enforced? The answer is both shocking and simple. REVENUE!. The fines from traffic citations contribute to the maintenance of government bureaucracies along with their associated drones who otherwise contribute little or nothing beneficial to society.

Most of those who are charged with traffic enforcement understand this but are loath to admit it. In fact this truism can be verified by observing that traffic flowing safely along a roadway at speeds substantially in excess of the posted limit is seldom molested by traffic officers even though they are frequently present. In most situations the errant motorist detained by the police is the idiot engaged in unsafe behavior such as cutting in and out of traffic, tailgating and otherwise calling attention to focus on him/her. In a word: RECKLESS DRIVING. Traffic officers for the most part are reasonably skillful at apprehending and dissuading such unsafe drivers.

Why then does your humble writer, having written several hundred traffic citations himself, aver that speed limits for the most part are in place to generate cash flow? In addition to having been exhorted to increase the generation of revenue by bureaucrats and low level politicos, and in order to further demonstrate this situation I will relate a true anecdote. While traveling across the country recently ΛΕΟΝΙΔΑΣ had occasion to drive through several sparsely populated jurisdictions. In many of these areas the interstate stretches to the horizon and traffic is light to non existent. The posted speed limit on this occasion was 75 miles per hour and yours truly was comfortably and safely cruising along at 79-80 mph. A vehicle traveling in the same direction was gradually being overtaken and revealed itself to be a state police vehicle operated by one of the state of Arizona's finest. I had obviously been observed by him in the process of overtaking and he was traveling at exactly the speed limit (75 mph). What to do? Sheepishly slow down and play the hypocrite or continue to slowly pass him while exceeding the limit by 4 MPH?

Having spent a few years in traffic enforcement during a previous life and judging that a grace of 9 to 14 mph was the rule I passed him. No sooner did I return to the #2 lane than his blue lights began flashing and I immediately pulled over. I noted that he approached our vehicle with citation book in hand and he politely requested the obligatory documentation. As luck would have it the necessary drivers license was tucked discreetly behind my retirement badge and identification which he was able to observe, whereupon he secured his citation book and proceeded to advise me of the infraction I had perpetrated against the good citizens of Cochise county, Arizona. He wrote me a "warning" and bade me a safe trip home to Georgia. I asked him if it was standard policy to detain motorists who exceeded the speed limit by 4 mph and he stated that there is no "grace" allowed in Arizona. Amen to that! For the information of those readers who are in legal possession of valid law enforcement credentials be advised that had the above incident occurred in the state of Colorado, ΛΕΟΝΙΔΑΣ would be at least $120.00 poorer.

the accompanying graphic was shamelssly stolen from: Sigmund, Carl and Alfred
at 5:19 PM

It's long been known that the safest drivers are the 85th percentile by speed; the very fastest are the most dangerous, but the slower drivers are more dangerous too. That's not surprising, as the less competent you are, the more likely you are to drive slowly to compensate.

Unfortunately when speed limits are set to raise revenue, they're literally and deliberately criminalising the _safest_ drivers. We've now had a decade of camera-enforced speed limits in the UK; after decades of perpetual decrease in death rates year after year, the death rates have been static or increasing for most of that time.

It's also been one of the greatest forces for undermining the respect that the British people used to have for the police, as they see themselves prosecuted and fined for behaving in a perfectly reasonable and safe manner.

Same here in New Zealand.
The real pity of it is that the police lose the respect and co-operation of the public. Certainly, they're obeying the directives of their superiors but they do so with a zealousness that would seem to indicate that they agree with revenue raising.
I have no respect whatsoever for a cop manning a speed gun. He's as bad as any other tax collector imo.

I do have to agree with you ΛΕΟΝΙΔΑΣ. I also think the Sobrity Checkpoint is another way of revenue generation. First they get 'grants' from our taxes we send to Washington for all the overtime. Then they get $$ from all the violations that are found at the stops. We just had a checkpoint up here in Fortuna, CA. They got one guy for DWI, and about 5 for suspended/revoked license. This from over 600 stops. I think that just by normal patrol the police could do more good than the 1% rate they did at the checkpoint. But then they wouldn't be gettin' the OT $$.

Derchoadus,
For further discussion of the incident I described check out the thread at http://www.eternityroad.info/index.php/weblog/comments/2412/
As for "sobriety checkpoints" they are a total waste of resources and from a cost benefit viewpoint a net loss. Additionally, they are a violation of the 4th 5th and 14th Amendments of the Constitution.